‘Our family has lost our precious baby girl’: Toddler dies after being struck by falling AC unit

The family of a two-year-old child fatally struck by an air conditioning unit at a Toronto Community Housing complex Monday say they are “devastated” by the loss of the little girl.

“Our family has lost our precious baby girl Crystal. We are devastated,” the family said in a statement released through a lawyer late Tuesday.

The family asked for privacy as they grieve their loss. They also thanked those who have reached out to offer support.

“We wanted to thank the public for the outpouring of support for our family while we are struggling to cope,” the statement reads.

Officers were called to the apartment complex on Lawrence Avenue East, near Mossbank Drive, shortly before 4 p.m. Monday.

Police said a woman was entering the building with her three children when an AC unit came out of the window of an eighth-floor apartment and fell to ground-level.

The AC unit, police said, landed directly on the woman’s two-year-old daughter, who was in a stroller.

The toddler was rushed to hospital in critical condition but she later died from her injuries.

The little girl has been identified as Crystal Mirogho.

Tearful neighbours lit candles outside the building Tuesday night, steps away from where the Mirogho was struck.

Neighbour Sonali Shah described the little girl as “an angel.”

“The angel is gone from our lives,” Shah said. “She was a happy go lucky kid. She used to talk to everybody, very friendly.”

Another resident, Monique Catline, said the tragedy means the girl’s mother will never see her grow up.

"She's not going to see her able to graduate, to fall in love, to do all the things that other parents are going to be able to do with their baby girls," Catline said.

Sherene Bromfield, who lives in the building, said she was in her apartment on Monday afternoon when she heard "screaming."

"I ran on my balcony and I looked over and I could see her trying to revive her daughter," Bromfield said.

The girl’s two siblings, who are ages five and seven, watched the tragic incident unfold. 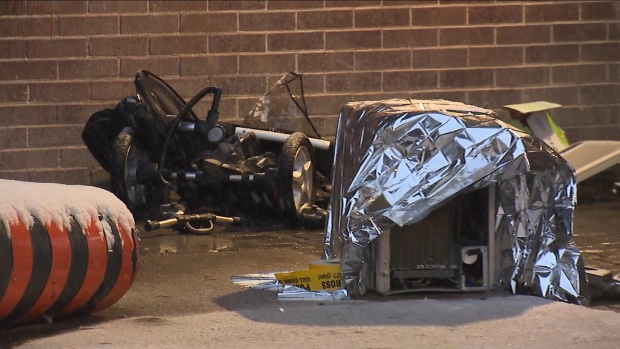 Investigators searched for witnesses and reviewed surveillance footage Monday and Tuesday to try and determine the sequence of events.

Police said Tuesday that they have wrapped up their preliminary investigation and no criminal charges are expected to be laid for the time being.

In a statement Tuesday, Toronto Community Housing said that it is “deeply saddened” and is reviewing the circumstances around the girl’s “tragic” death.

“Our thoughts are with the family at this difficult time and we offer them our sincere condolences,” the corporation said in a statement.

“Toronto Community Housing staff attended at the building yesterday alongside Toronto Police Service to investigate what took place and we continue to review this incident. We will take any appropriate action once the facts are known.”

The statement said that TCHC would be onsite at the building today to assist tenants who require support.

A Toronto Community Housing spokesperson said Tuesday that a program run at the building in the summer of 2018 offered to swap out window-mounted air conditioners for floor models, free of charge.

“It's a safety issue,” TCH spokesperson Bruce Malloch told The Canadian Press. “A floor model will not fall out of a window and (they) are also more energy efficient and that has a safety component as well - not to overload the wires.”

He said TCH recognizes that air conditioning units “can have a serious safety risk if they are not properly installed.”

TCH tenants have to obtain permission from their landlord before installing AC units and the units have to be installed by a professional who complies with safety regulations, Malloch said.

Mayor John Tory offered his condolences Tuesday and vowed that the city would conduct a “thorough” investigation into the tragic incident.

Slavko Ristich the lawyer representing Crystal’s family, said that the family will be putting TCHC on notice that they are seeking answers.

“We’re in the beginning part of our investigation stage of this accident,” Ristich told CP24.

He said the family’s understanding is that AC units were not supposed to be in windows that weren’t over balconies.

“When we’re able to answer those questions, we’re going to be able to come up with some answers of how to prevent something like this in the future.”