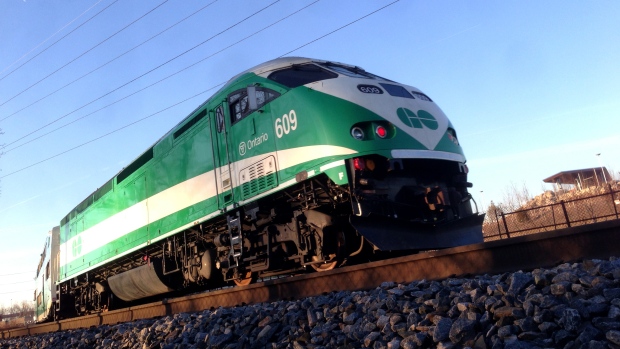 A GO Train passes along a stretch of tracks alongside the Don Valley Parkway in Toronto on Friday, April 5, 2013. (CTV Toronto/Maurice Cacho)

TORONTO -- Delays and overcrowding on commuter trains serving southern Ontario is causing chaos for users of the busy regional transit system this summer.

Metrolinx, the Ontario government agency that runs GO Transit, said the problems are caused by "unavoidable" repairs and upgrades. The agency issued refunds to passengers after a day of significant delays in June.

A new GO Transit schedule came into effect June 27, causing delays on multiple GO lines in and out of Canada's largest city.

Metrolinx spokeswoman Anne Marie Aikins said service changes in advance of two platform closures for construction of a new train shed at Toronto's Union station are behind most of the issues. At the same time, some older trains are also running with 10 coaches instead of the usual 12 while their HVAC systems are upgraded, leaving those trains with about 300 fewer seats.

That work is the regular maintenance Metrolinx typically does in July because ridership drops when students are out of school for the summer. Work on the coaches is expected to be finished by the end of the month.

In a recent interview, Aikins said it's been a "difficult couple of weeks," with customers on the busy Lakeshore West and Lakeshore East lines bearing most of the brunt.

Trains have also been moving slowly due to hot temperatures, as the heat can cause dangerous bends in the train rails.

Melinda Shiers, who commutes to Union Station from Whitby, Ont., every day, said she's seen schedule changes cause trouble before, and they're usually resolved within a few days -- but not this time.

She said her morning trip to Toronto has still been relatively smooth, but there hasn't been a day since the service and schedule changes that she hasn't been late returning home.

"When people are tired, they just want to get home. They don't want to hear the excuses. GO Transit sends out all their tweets about this delay or that delay. I'm tired of the apology -- just fix the issues, please."

After the schedule changes on June 27, a litany of commuter complaints prompted Metrolinx chief operating officer Greg Percy to issue a statement the following morning, calling the service problems "not our finest moment."

He blamed "operational issues" for some of the problems, referring to issues that encompass everything from signal malfunctions to a train door not closing properly. Unrelated IT failures caused incorrect or missing schedules, adding to the troubles.

"As chief operating officer, I take personal responsibility and am committed to a full investigation," Percy said in the statement.

When asked this week what he meant by taking "personal responsibility," Percy responded in an email that he's "looking critically" at the new schedule to make sure the same issues don't arise in the future. He added Metrolinx's "focus is on gathering data" to identify issues.

"On-time performance has improved but we know we can do better," he said in the email. "GO Transit has never experienced service changes of this magnitude and some growing pains were expected."

Ontario Transportation Minister Steven Del Duca said in an emailed statement that he is aware of the recent service delays, and added that it's important Metrolinx communicates with passengers about expected travel delays.

"Our commitment to every one of GO's over 265,000 daily customers is that we will continue working to keep our service efficient, reliable and a valued part of your daily commute," he said.