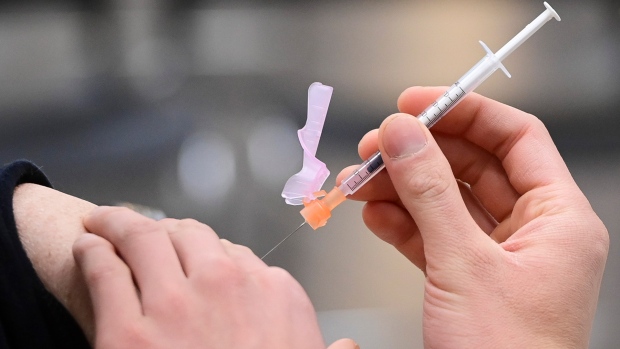 TORONTO -- It's hard for Prentice Scott to choose a highlight from a day spent vaccinating seniors against COVID-19 in the lobby of their Windsor, Ont., apartment building.

“Everybody that comes into that room that sits down at my table to get the vaccination is extremely pleased,” the community paramedic said in a recent interview.

Scott's team with Essex-Windsor EMS is one of several across Ontario bringing vaccinations to homebound seniors who can't get to immunization clinics.

The program in Windsor started earlier this month, bringing pop-up clinics to apartment buildings with a high number of eligible seniors. A similar project is underway in Sudbury, Ont., while paramedics and other care providers in Toronto are also taking vaccines to homebound seniors.

Scott said the job has brought hope to the paramedics and as well as their patients.

“It feels good trying to lick this virus, to get rid of it,” he said. “I think what we're doing right now, getting to the nitty gritty, the corners where people can't get the vaccination is, is paramount.”

Programs like the one offered by Scott's team and other paramedics offer a solution to the growing vaccination gap among the oldest Ontarians.

Nearly a quarter of people over 80 - who make up the vast majority of COVID-19 deaths in Ontario - remain unvaccinated, according to data from the province.

The issue is more acute in Toronto, where just 55.6 per cent of people 80 and older had been vaccinated as of Monday and officials have publicly pleaded with eligible seniors to sign up after appointments at mass sites were left unfilled.

Dwindling registrations among the oldest Ontarians have prompted the province to offer appointments up to the next age cohorts weeks ahead of schedule.

The Progressive Conservative budget tabled this month also allocated $3.7 million for a plan to help transport seniors to immunization sites.

“We're already realizing very quickly, as we predicted, that there are people who are being left behind,” said Toronto geriatrician Dr. Samir Sinha, who is involved in planning the homebound vaccinations strategy in his city.

Seniors might not be signing up for a variety of reasons, including trouble navigating online booking systems, accessing the phone line or inability to get to a physical site, Sinha said.

The city's homebound strategy is drawing on resources from anyone willing to help, identifying candidates through the Toronto Public Library membership list and programs like Meals on Wheels. Sinha said there are plans to eventually gather input from the public about people who may have been missed on homecare lists or other services.

“It's been terrific because I've had a number of my patients now who have been successfully vaccinated in their own homes, who I was quite worried about would be left behind,” he said.

“I think as we ramp up over the coming weeks, and frankly months, we could end up vaccinating maybe even upwards of tens of thousands of people in their own homes.”

Sinha said current estimates indicate about 20,000 people 65 and older are homebound in Toronto, out of about 75,000 across the province.

He noted that number doesn't include younger homebound individuals who would also benefit from an in-home vaccination program.

In Windsor, the in-home vaccination project started targeting buildings with a high density of seniors, an approach recommended by the province's science advisors.

Essex-Windsor EMS Chief Bruce Krauter said the model uses substantially fewer resources than mass vaccination sites and leverages the knowledge and connections of paramedics who work with seniors and in areas where many chronically ill people live.

“The public health units, if they haven't already engaged, they should be engaging with their paramedic services,” Krauter said. “You can get a lot of people vaccinated in a very short amount of time with a short amount of resources.”

Peterborough, Ont., paramedic Jason Fraser, chair of the CUPE Ambulance Committee of Ontario, said such models could be easily scaled up around the province, not just targeting apartment buildings but also bringing shots to homebound individuals in rural areas where transit to larger sites isn't easily accessible.

“I think it's a great avenue that the province and public health folks should take a look at, accessing the highly trained skills of paramedics across the province to deliver this method to those people,” he said.