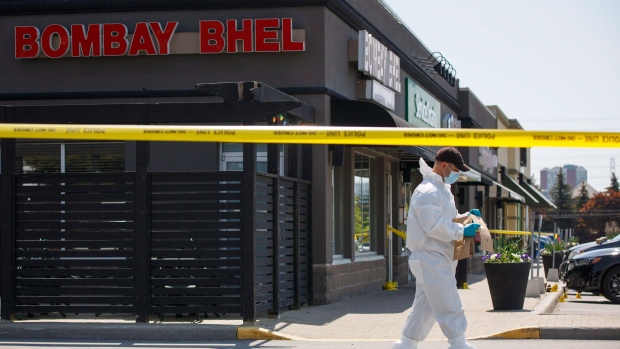 Police forensic officers work around the scene where an IED ripped through a Mississauga, Ont., restaurant early Friday morning, on Friday, May 25, 2018. THE CANADIAN PRESS/Cole Burston

MISSISSAUGA, Ont. - Police west of Toronto are no longer at the scene of an explosion that rocked an Indian restaurant and left 15 people injured last week, but the search for two men suspected in the blast continues.

Peel regional police say investigators wrapped their work at the Bombay Bhel restaurant in Mississauga, Ont., on Sunday night, but management says the restaurant will be closed until further notice.

Police are still probing Thursday's incident, in which two suspects allegedly detonated an explosive device in the restaurant before fleeing the scene on foot and then jumping into an unidentified vehicle.

Fifteen of the approximately 40 people inside the restaurant were injured, but all have since been released from hospital.

The restaurant's website says the Mississauga establishment will remain closed until further notice, but its three other locations are open for business.

A statement posted on the restaurant's Facebook page on Saturday says that they have “been serving our customers for over 30 years and will do so for another 30 years in the great city of Mississauga.”

Police search around a wooded section near the scene of an explosion at a restaurant in Mississauga, Ont. on Friday, May 25, 2018. THE CANADIAN PRESS/Cole Burston