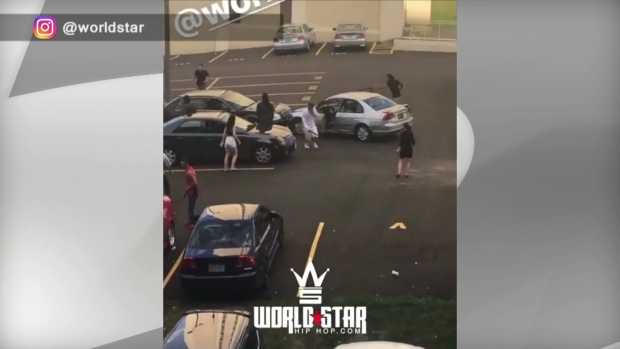 A screengrab of a video posted by World Star Hip Hop shows a fight in a Mississauga parking lot. (WorldStarHipHop.com)

Police are investigating after a video showing a violent dispute in a parking lot in Mississauga was posted on a popular entertainment website.

The incident reportedly occurred on Aug. 14 before 6 p.m. in the Hurontario Street and the Queensway West area, Peel police Sgt. Josh Colley told CP24 on Friday.

The video, which was posted on World Star Hip Hop’s Instagram account, is being handed over to investigators, Colley said. It shows people throwing punches, being dragged on the concrete. Two men involved are seen carrying long sticks. At one point, the driver of a Cadillac sedan smashes into a parked Honda Civic, pushing it back several metres.

One of the men involved can be seen lying flat on the ground of the parking lot toward the end of the video as a car speeds away. Const. Bally Saini of Peel Regional Police said they want to speak with all parties involved in the fight, but in particular the man who fell to the ground when the Cadillac struck the Civic to ensure he is okay.

Officers were called to the scene and interviewed some people involved, said Colley, but no arrests were made at the time. He also confirmed no weapons were located.

The video was filmed by a woman from inside a nearby building and sent to World Star Hip Hop.