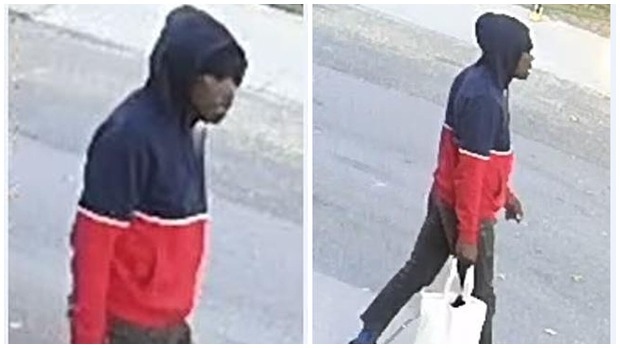 Investigators have released a security camera image of a man wanted in connection with a robbery investigation. (Toronto Police Services)

Investigators have released security camera images of a man after a senior was robbed near the city’s Annex neighbourhood last month.

Police say that an 87-year-old woman was walking on Brunswick Avenue, south of Bloor Street West, around 5:30 p.m. on Oct. 14 when she was attacked by a man.

The man, police allege, attacked the woman from behind and threw her to the ground. Police say the woman was then robbed of her belongings.

Investigators say the man fled eastbound through an alley.

Police have released security camera images in hopes that a member of the public will be able to help investigators identify the man.

The suspect has been described as standing at about six-feet-tall with a thin build. He was last seen wearing a dark toque, a two-toned hooded sweater, dark pants, dark shoes and was carrying a white bag.

Anyone with information is being asked to contact police at 416-808-1400 or to reach out to Crime Stoppers anonymously.