Police search for 2 suspects wanted in stabbing at Hamilton bar 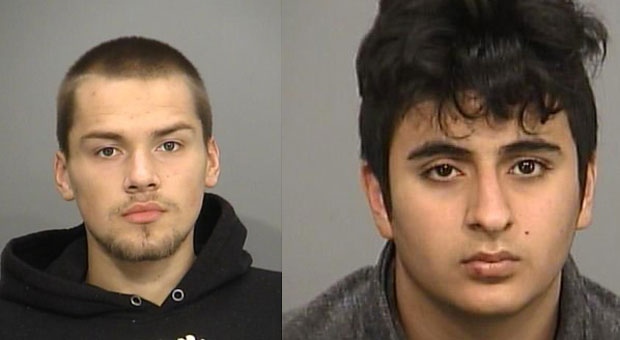 Joseph Barham-Ferguson (left) and Fuhill Badei are wanted in connection with a stabbing at a Hamilton bar. (Hamilton police handout)

Police say they have identified two suspects wanted in connection with a stabbing at a Hamilton bar last weekend that left one male injured.

The stabbing occurred at the West Lounge Café shortly after 2 a.m. on Saturday.

According to investigators, a physical altercation broke out between one male and two male suspects at the west-end bar.

Police say one suspect wounded the victim with a knife while the other suspect pointed a handgun at the victim.

The injured male was transported to hospital by his friends and staff notified police of the incident.

Warrants have now been issued for the arrest of two suspects in the case.

The suspects, who are both 20-year-old residents of Hamilton, have been identified by police as Joseph Barham-Ferguson and Fuhill Badei.

Barham-Ferguson is wanted for aggravated assault and police say Badei will be charged with pointing a firearm, carrying a concealed weapon, using a firearm in the commission of an offence, possession of a weapon for a dangerous purpose, and assault with a weapon.

“The males are considered armed and dangerous and if observed, Hamilton Police are asking the public not to approach but to call 911 immediately,” police said in a news release issued Thursday.

Anyone with information about the suspects or the case is asked to contact police or Crime Stoppers.