TORONTO -- Postmedia is cutting approximately 90 jobs and merging newsrooms in four cities as Canada's largest newspaper chain steps up plans to slash costs in the midst of mounting revenue losses.

The company owns two newspapers in each of the cities of Ottawa, Calgary, Edmonton and Vancouver following its acquisition of Sun Media last year. Now those city papers will share a newsroom, although they'll continue putting out different publications.

"We will continue to operate separate brands in each of these markets," Postmedia CEO Paul Godfrey said in a memo sent to staff. "What is changing is how we produce these products."

The two Calgary newspapers -- the Calgary Sun and Calgary Herald -- will share one editor, as will the Edmonton Journal and Edmonton Sun, Godfrey said.

He said the Ottawa Citizen and Ottawa Sun will also have one editor, adding the company is looking for someone to fill that role.

In all, about 90 staff have been laid off. Phyllise Gelfand, the company's vice-president of communications, said those layoffs include about 35 people in Edmonton, 25 in Calgary and 12 in Ottawa.

Paul Morse, president of Unifor Local 87-M -- representing some of the Ottawa employees who were let go -- accused Postmedia of breaking its promise to continue operating two independent newspapers in each of those four markets.

Postmedia executives planned to keep the newsrooms of each outlet separate, Godfrey said at the time, but were considering merging other departments.

Postmedia says the move won't have an impact on editorial freedom, but will simply reduce some duplication between what the newsrooms produced.

"A small rewrite desk and an editorial team will ensure that, you know, the right voice and content gets to the right product and platform," said Gelfand.

In a statement, the Communications Workers of America union's Canadian chapter called on the federal government to intervene with "legislation or regulations to limit concentration of media ownership."

John Pecman, the head of the Competition Bureau, has a year from when the transaction finalized to bring an application to the tribunal to challenge the decision. That deadline passes in March.

However, it's unlikely it will be challenged, said Phil Norris, a spokesman for the bureau.

"These types of business decisions by Postmedia ... are generally not cause for us to re-examine the transaction."

Postmedia is not obliged to consult with the bureau if they decide to close newspapers, he added.

The layoffs included Stephanie Coombs and Margo Goodhand, who were the managing editor and editor-in-chief at the Edmonton Journal respectively.

The cuts come less than a week after Postmedia announced it was stepping up its efforts to reduces costs to overcome continued losses in advertising, print circulation and digital media revenue.

Postmedia also said it was on track to meet the $50-million target by this May 31, the end of its fiscal third quarter. 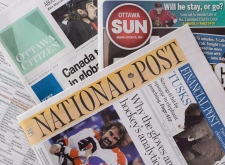 Postmedia newspapers, including the National Post and Ottawa Citizen, are shown with Quebecor Media's Ottawa Sun on Monday, Oct. 6, 2014. (The Canadian Press/Justin Tang)