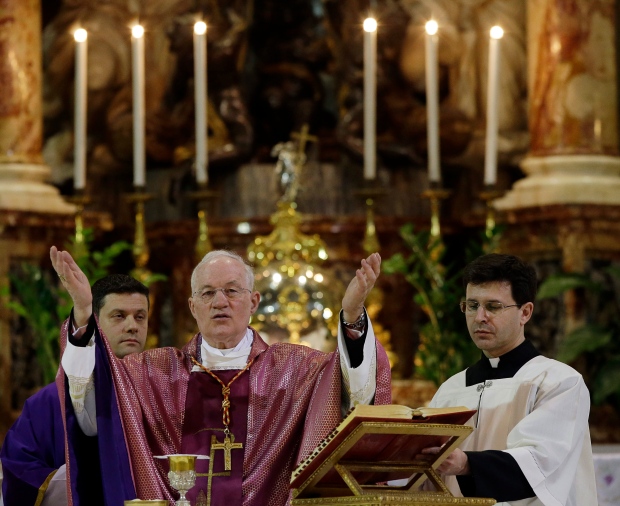 MONTREAL -- A Quebec group representing people abused by priests hopes Cardinal Marc Ouellet will be the next pope, though not necessarily because it feels he's the best candidate.

Carlo Tarini, a spokesman for the group, says a Ouellet papacy would thrust a number of sexual abuse cases involving Quebec priests into the spotlight.

"The people here today are not here in jest supporting his nomination as pope," Tarini said at a small rally on Sunday on the steps of a Montreal church.

"They are really hopeful that he is elected, because 1.2 billion Catholics will be made aware of the victimization of children here in Quebec by pedophile priests over several generations."

Many at the rally, which included supporters from other victims groups, said they are hopeful for progress on cases that have been stalled for years.

Tarini suggested appointing a mediator between the church and victims such as former Supreme Court justice Michel Bastarache, who took on a similar role in New Brunswick, to help move things forward.

The Quebec-born Ouellet is considered one of the contenders to succeed Pope Benedict, who announced his resignation last month.

He has come under fire in the past from critics who say he didn't do enough to address the issue of sexual abuse in his home province.

Lucien Landry, head of an organization for abused Quebec orphans, said Ouellet didn't make an effort to work with victims while he was archbishop of Quebec City.

Landry attended the rally, but stressed that he doesn't believe things would be any different if Ouellet became pope.

"In our heart of hearts, we don't think he would fix the situation," he said.

Luc-Robert Archambault, representing a group of victims from Montreal's College Notre-Dame, a boys-only boarding school, was also skeptical of a Ouellet papacy.

"I don't think Cardinal Ouellet will help what we are trying to do in terms of addressing sexual abuse cases," Archambault said.

"For fifty years in the church, the silence has been overwhelming."

In an interview with CBC television last week, Ouellet addressed the church's handing of its sexual abuse scandals. He defended the church and said it had to bear intense public scrutiny when stories of abuse came to light.

"But it is not a Catholic problem; it is a human problem," he said.

"Most of the abuse occurred in families in very general in society, and my hope is what was done by the Catholic Church, which is not yet perfect, but could be also of example for others in society."