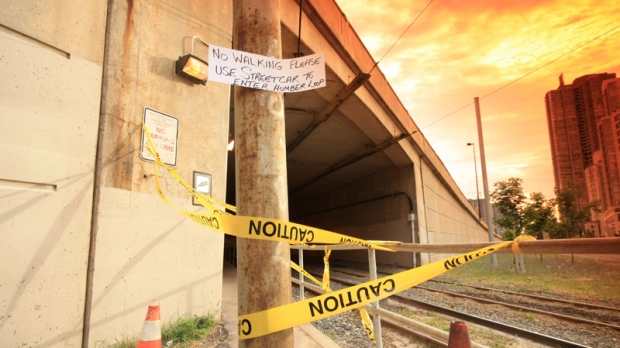 Service on the TTC’s 501 Queen streetcar route was interrupted Saturday after concrete was spotted falling from the Gardiner Expressway.

The TTC said in a tweet shortly after 5 p.m. that there was no service from the Humber Loop to the Long Branch Loop on the 501 Queen Streetcar route because of emergency underpass repairs at the Humber Loop.

Streetcars normally pass underneath the overpass. The TTC said they would run shuttle buses instead while repairs were underway.

Police at 22 Division confirmed repair crews had been called in. They did not provide more specific information on the repairs.

This is at least the second time the spot has needed work this year. The TTC closed off the area around the Humber Loop in July after debris fell following construction in the area.

The repairs were complete and full streetcar service resumed shortly before 8 p.m., the TTC said on Twitter.