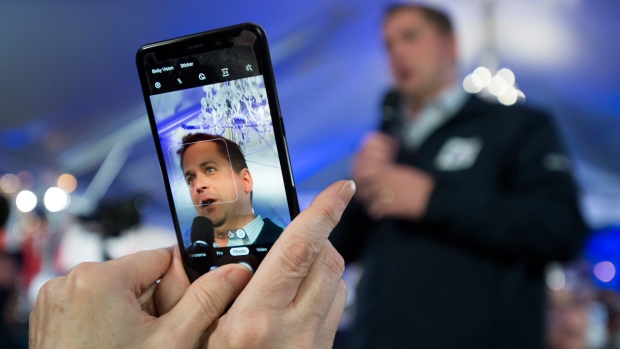 A woman takes a picture of Conservative leader Andrew Scheer with her smartphone as he attends a rally during a campaign stop in Langley, B.C. Friday, October 11, 2019. THE CANADIAN PRESS/Jonathan Hayward

BURNABY, B.C. -- Andrew Scheer is starting to lay out what he would do in the first 100 days of a Conservative government to end what he calls “frivolous spending.”

The Conservative leader says he would name former B.C. finance minister Kevin Falcon and Yves Desjardins-Siciliano, former chief executive of Via Rail, to head a commission on what he calls corporate welfare.

The Tories are promising to cut $1.5 billion annually from federal subsidy programs to private-sector companies.

The commission would also recommend new performance measures for subsidies and review “innovation” programs to ensure the money targets domestic companies with benefits, profits and patents staying in Canada.

Scheer is making the announcement in the riding of Burnaby South, which is held by NDP Leader Jagmeet Singh and where the Conservatives have been competitive in past elections.