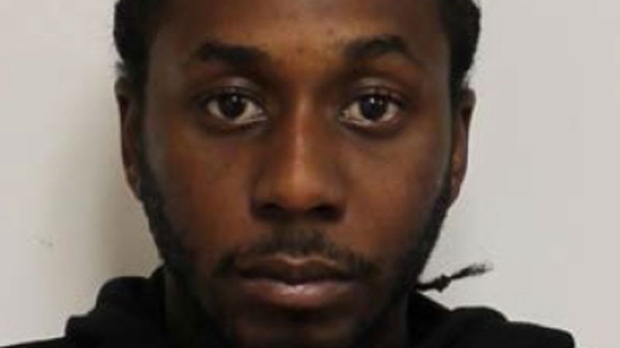 A second arrest has been made in connection with the fatal shooting of a 26-year-old man in Rexdale earlier this month, but a third suspect is still outstanding.

Blain Gerrado Grindley was found suffering from multiple gunshot wounds inside a townhouse complex on John Garland Boulevard near Humber College Boulevard on the afternoon of May 1. He was pronounced dead at the scene.

Speaking with CP24 on the day of the fatal shooting, family and friends of Grindley described him as a “wonderful young man.”

At a news conference on May 15, investigators released the names of three suspects wanted in connection with the deadly incident.

One of those suspects, 21-year-old Andrae Douse, turned himself into police following the news conference and appeared in court one day later, facing a first-degree murder charge.

On Monday, 29-year-old Michael Smith, of Toronto, also surrendered to police and has been charged with first-degree murder as well. He is scheduled to appear in court on Tuesday morning.

The third suspect, identified by officers as 27-year-old Dayne Sitladeen, remains outstanding. He is wanted on a Canada-wide arrest warrant for first-degree murder, police said.

Investigators said Sitladeen is considered to be “violent, armed and dangerous.” If anyone spots him, police said, they are urged to call 911 immediately and not approach.

(From left to right): Michael Smith, 29, Andrae Douse, 21, and Dayne Sitladeen, 27, are all wanted on a charge of first-degree murder. (Toronto police handout)

Blain Grindley is seen in this image provided by Toronto Police Service.