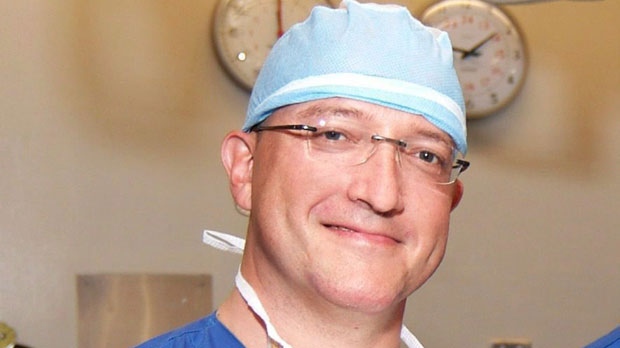 Dr. Michael Tymianski is seen in this undated handout photo. Newly reported Canadian research is holding out hope that a treatment for minimizing the damage done by a stroke could be on the horizon. (CP/ Handout photo)

TORONTO -- A Canadian effort to develop a drug to limit the brain damage caused by strokes has made an important step forward.

Scientists involved in the project reported Sunday that in a trial conducted on patients undergoing repair of brain aneurysms, the drug, called NA-1, reduced the number of post-procedure strokes by about half.

This is rare good news in the quest to develop a neuroprotective drug, a field where over 1,000 compounds have been tested, and all failed.

The researchers themselves have founded a biotechnology company -- NoNO Inc. -- to finance the work, because the pharmaceutical industry has essentially left the field. NoNO means "no nitric oxide," the free radical produced during a stroke that damages brain tissues.

"The issue with Pharma is that stroke has been such a wasteland for them that no one's willing to invest," said Dr. Michael Hill, a stroke neurologist with the University of Calgary's Hotchkiss Brain Institute and the Calgary Stroke Program at Foothills Hospital.

Hill is first author on the scientific paper outlining the findings, published in the journal Lancet Neurology.

The paper reports the results of a Phase II trial, which is the first level in the hierarchy of clinical trials where studies are designed to look for proof a drug or an intervention actually works.

But Phase II trials are small; this one only included 185 subjects. In order to persuade Health Canada or the drug regulators of other countries that this drug should be brought to market, a larger, Phase III trial will have to be successfully conducted.

That's already in the planning stages, said Dr. Michael Tymianski, who in addition to being a neurosurgeon at Toronto Western Hospital, is president of NoNO Inc. Tymianski was the senior author on this study.

Still, the researchers are declaring their results proof of the principle that the brain can be protected from the cascade of damage a stroke touches off. And a commentary the journal published in conjunction with the study essentially concurred.

Kaste was not involved in the Canadian trial, but he was the principle investigator on a trial of another neuroprotective drug called edaravone (sold as Radicut). That drug, which is licensed for use in Japan, is made by Mitsubishi Tanabe Pharma. In his conflict of interest declaration, Kaste disclosed he consults for the company.

He noted more work on these drugs is needed and pointed out that the way the Canadian trial was designed doesn't mirror what happens in the real world.

In the study, people who had to undergo surgery to repair a brain aneurysm were randomly assigned to get NA-1 or a shot of salt water. Subjects got the injection at the end of their surgery, so before the strokes would be expected to start occurring.

Timeliness is a problem in stroke care. There is an existing treatment regime -- clot busting drugs -- but they can only be given after it's been determined that a stroke is an ischemic one (caused by a clot) and is not the result of a bleed in the brain. To give these blood-thinning drugs to some whose stroke was caused by a bleed would make matters worse.

Clot busters must be given within 4.5 hours of a stroke to have any effect. But few people make it to the hospital and through the testing needed to determine the cause of the stroke in time to benefit from the drugs. A national audit of stroke care done in 2011 showed that only eight per cent of Canadians who experience a stroke are diagnosed in time to get treated with clot-busting drugs.

"Even in the most organized emergency rooms only a minority of patients with ischemic stroke receive thrombolysis (clot busters) within the first 90 minutes after stroke onset," Kaste noted.

Hill explained they studied this group of patients because about 90 per cent of people who undergo brain aneurysm repair will experience small strokes caused by blood clots in the hours after the procedure.

People who got NA-1 had about half as many small strokes as the people who got the saline shot. And in the cases where the surgery was done to repair a brain aneurysm that had already burst -- a circumstance where brain damage would be expected -- people who got the drug did substantially better than those who did not.

Hill noted, though, that the study was too small to be sure that latter result was real and not the result of chance. He said the next level of testing will look at neurological outcomes -- whether people who receive the drug retain more function and sustain less memory loss or other cognitive consequences of stroke.

The study said the drug was well tolerated, with no real safety concerns. Two people who were in the treatment arm had major strokes after their surgeries, but it was felt the strokes were triggered by the procedure or their underlying medical condition, not the fact they received the drug.