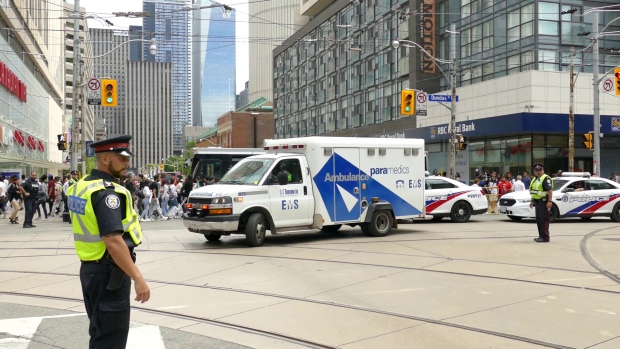 Paramedics respond to the scene of a stabbing in the area of Bay and Dundas streets Monday June 17, 2019. (Pascal Marchand)

Police have made an arrest in connection with the stabbing of four people downtown during the Raptors championship parade last month.

The stabbing happened near Yonge and Dundas streets at around 2 p.m. on June 17 as hundreds of thousands of people filled the downtown core to celebrate the champion Raptors.

Police have previously said that a male suspect approached a group of men on the street and got into some sort of altercation with them. The man then produced a knife and stabbed four of the individuals, police say.

The victims, three men and one boy, were taken to hospital with serious injuries after the stabbing.

Police say that officers executed a search warrant in the Yonge Street and Major MacKenzie Drive area of Richmond Hill on Thursday and arrested the suspect.

Michael Oneil Donalds, 29, is facing nine charges, including four counts of assault with a weapon.

The arrest comes weeks after police released surveillance images of a suspect in the case.

Donalds is scheduled to appear in court at Old City Hall today.