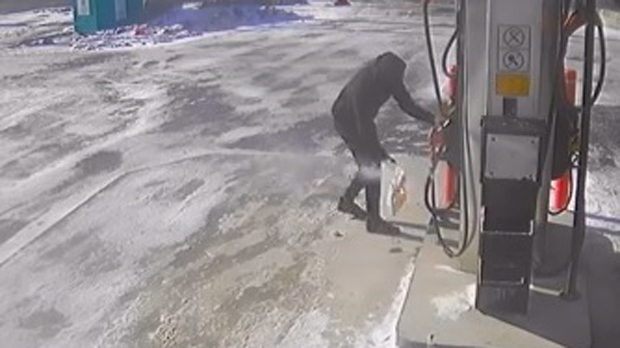 A suspect is seen placing a flaming bag at the foot of a gas pump in Scarborough on Jan. 13, 2018. (Toronto Police)

Police have released surveillance camera footage of a suspect who allegedly tried to set a gas pump on fire at a gas station in the Ionview area of Scarborough on Saturday afternoon.

Toronto police say that at 12:25 p.m. on Saturday, they were called to a gas station in the area of Eglinton Avenue East and Ionview Road for a report of “disorderly” individuals nearby.

Footage released Sunday shows a suspect walking onto the grounds of the gas station with a light coloured package.

The suspect is seen lighting the package on fire and placing it near a gas pump.

The suspect, clad all in black with his face covered, then places a gasoline nozzle on top of the bag and flees the scene.

Anyone with information about this incident is asked to call police at 416-808-4100.