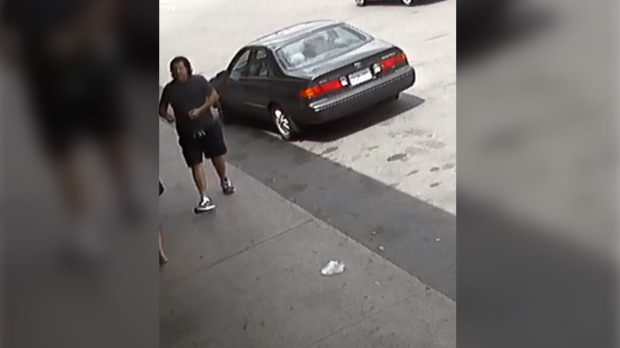 Peel Regional Police have released an image of a man wanted in a hit-and-run in Mississauga on July 20.

Peel Regional Police have released surveillance video of a suspect and suspect vehicle wanted in connection with a hit-and-run that happened in Mississauga earlier this summer.

Shortly before 1 p.m. on July 20, a 78-year-old woman was walking on the sidewalk near Hurontario and Dundas streets when a vehicle reversed out of a plaza, located at 2549 Hurontario St., and hit the woman, police said.

Investigators said the victim was knocked to the ground and sustained a fractured hip.

The suspect then picked up the victim and placed her in his vehicle and drove to a convenience store to purchase her a mask before driving her to the hospital, according to police. The suspect then left the hospital without providing his name or address.

Investigators have released video of the incident and a photo of the suspect.

The suspect vehicle is described as an older model grey Toyota Camry, made between 1991 to 2001, according to police.

The driver is described as a Caucasian man with shoulder-length black hair. He was last seen wearing a grey T-shirt and black shorts.

Police are also looking to speak with the driver of a dark-coloured Nissan SUV who appears to have protected the victim by blocking a lane of traffic with their vehicle after the incident.

Investigators are asking anyone with surveillance or dashcam footage of the area or anyone with information to contact police or Crime Stoppers anonymously.