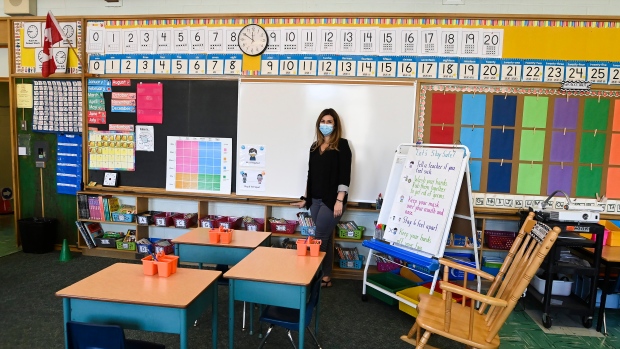 Grade two teacher Vivian Mavraidis prepares her classroom at Hunter's Glen Junior Public School which is part of the Toronto District School Board (TDSB) during the COVID-19 pandemic in Scarborough, Ont., on Monday, September 14, 2020. THE CANADIAN PRESS/Nathan Denette

TORONTO - Canada's largest school board says it no longer needs additional classroom spaces for elementary schools because so many parents have opted out of in-person learning.

The Toronto District School Board says there were initial concerns about the lack of space at five of its schools, but more students have since switched over to online learning.

Spokesman Ryan Bird says thousands of parents have made the switch in recent weeks as the spread of COVID-19 increases in Ontario.

He says that means those schools where there were concerns will now be able to make do by using gyms and libraries for teaching.

The board says it will continue to look for additional classroom spaces in case the need arises.

Earlier in the summer, the TDSB identified multiple Toronto neighbourhoods that were hardest-hit by the coronavirus and set out to lease learning spaces outside of schools.