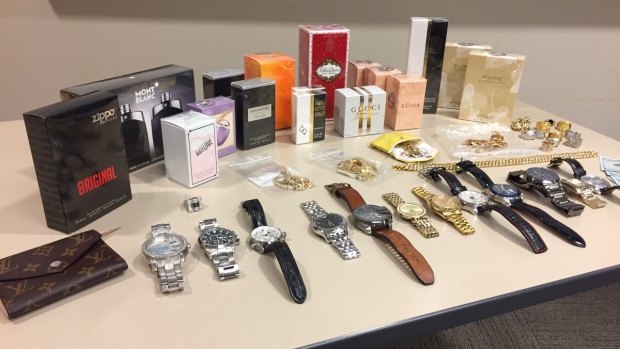 Items seized in a break and enter and theft probe is shown in a HRPS handout image.

Police in Halton Region say they have arrested seven suspects believed to be operating a theft ring targeting jewelry, cash, clothes and cologne at stores and in residences across the GTA.

At the start of May, Montreal police sent a tip to Halton Regional police, warning them of several people believed to be travelling to the GTA to commit break and enters.

On May 14 at 8:30 p.m., officers on patrol at the Toronto Premium Outlets in Halton Hills when they spotted a group of people entering the Tommy Hilfiger store.

Investigators followed two men from the group and allegedly witnessed them breaking into a home in Pickering on the following the day.

They were both carrying stolen property at the time of their arrests, police allege.

Their arrests led police to search two homes in North York and Mississauga, where five additional suspects were arrested and approximately $150,000 worth of stolen chains, rings, watches, designer clothes and cologne was recovered.

A total of seven people, hailing from Vaughan, Richmond Hill, Laval, the Dominican Republic and further afield in Latin America were charged with offences including theft under $5,000 and possession of property obtained by crime.

Halton police say some of the suspects have ties to Chile, Colombia and the Dominican Republic.

“The Halton Regional Police is working hand in hand with the Canada Border Services Agency to determine their current status in Canada,” officers said in a statement released Friday.

Jewelry seized by Halton Regional Police is shown in a handout image.