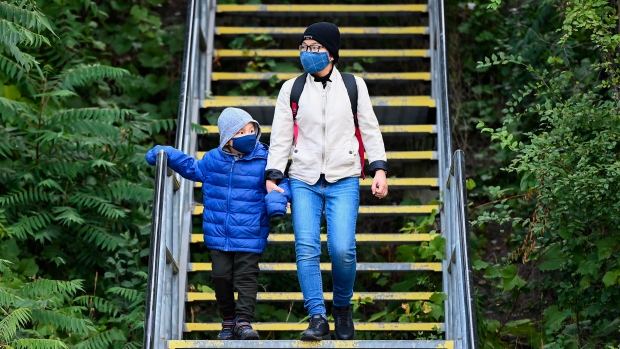 Parents take their children to school at Portage Trail Community School which is part of the Toronto District School Board (TDSB) during the COVID-19 pandemic in Toronto on Tuesday, September 15, 2020. THE CANADIAN PRESS/Nathan Denette

Ontario families with children can expect to receive a new round of payments from the government aimed at relieving pressures related to the pandemic.

The provincial budget released Wednesday revealed the Ontario COVID-19 Child Benefit will give parents at least $400 for each of their children in a third round of payouts, doubling the amount previously issued under the measure.

The direct payment, paired with a temporary 20 per cent top-up on Ontario's child-care tax credit, is aimed at easing the economic burden on parents and allowing them to return to work.

“For some, that (burden) includes financial challenges caused by the pandemic. For many, it includes new expenses to start virtual learning or child care,” Finance Minister Peter Bethlenfalvy said in his budget speech. “For all, it includes anxiety about their child's future in a world that will look different than it does today.”

The first round of direct payments to parents, called the Support for Learners program when it was announced nearly a year ago, offered $200 per child under the age of 12 or $250 per child or youth with special needs aged 21 and under.

The second round, announced in November, expanded its criteria in January to include all kids in Grade 12 and younger.

This time around, the province is doubling the payout to $400 per child in Grade 12 or younger, and $500 per child or youth with special needs aged 21 and under.

Parents who received the earlier funding will automatically qualify for the new payments, the province said, while those who didn't apply before will have the chance to do so now.

The initial two rounds cost the province a total of $868 million, budget documents indicated, while the latest new payout has an expected price tag of $980 million.

The province is also proposing a one-time 20 per cent top-up to the Childcare Access and Relief from Expenses tax credit, which was introduced in 2019.

“Nearly every economist I speak with says making child care more affordable is one of the keys to ensuring a robust recovery from COVID-19,” Bethlenfalvy said. “...I also hear it directly from parents. Too many say the high cost of child care will keep them out of the work force.”

The 20 per cent increase to the tax credit is expected to boost support from an average of $1,250 per family to $1,500, according to budget documents.

That's expected to apply to about 300,000 families, the documents said.

Ottawa has promised to deliver a national child-care strategy in its own 2021 budget, the provincial budget noted.

They also proposed spending $20 million over five years to build a child-care secretariat to guide federal policy work, plus $15 million in ongoing spending for a similar Indigenous-focused body.

In its budget, the Ontario government urged Ottawa to provide “increased and sustained funding” for child care while offering the provinces flexibility to figure out what works best in different regions.