Thousands of people packed the streets of downtown Toronto on Saturday afternoon for two separate peaceful protests calling for an end to anti-Black racism.

Hundreds of protesters began gathering at Nathan Phillips Square at around 1 p.m. for a peaceful walk being organized by the group Action for Injustice.

The protesters then began marching north on University Avenue shortly before 2 p.m. 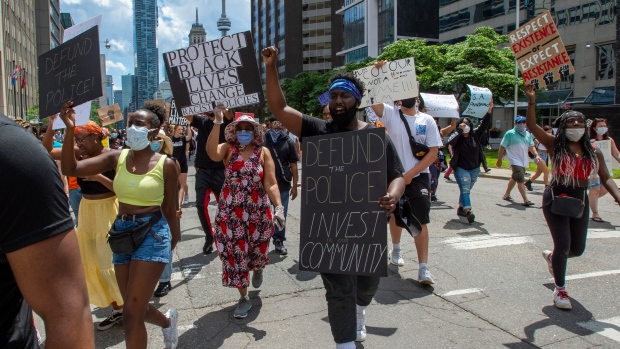 At one point, the group came to a stop near the U.S. Consulate and silently took a knee for eight minutes and 46 seconds in honour of George Floyd.

Floyd was killed in Minneapolis last week after an officer placed his knee against his neck for eight minutes and 46 seconds in an incident that was caught on video.

The incident has since sparked protests across the globe and the eight minute and 46 second moment of silence has come to symbolize police brutality.

Among those in attendance for Saturday’s Action for Justice march was Sahar Bahadi.

Her son, Sammy Yatim, was shot and killed by a Toronto police officer on an empty streetcar seven years ago. The officer, James Forcillo, was later convicted of attempted murder for a second volley of shots that came as Yatim lay dying on the floor of the streetcar. 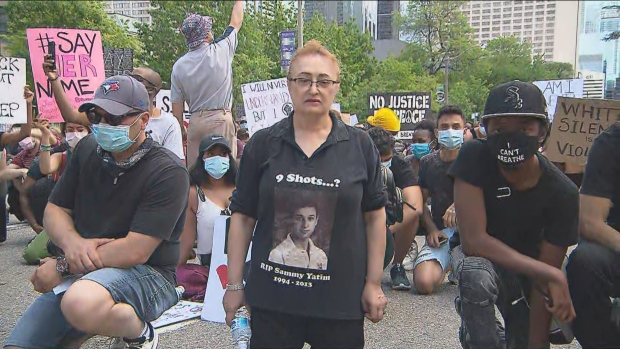 “I feel sorry for the people who lost their children, a member of their family without any reason by the police. Police should be protecting us, not killing us. My heart is with everybody here,” Bahadi told CP24.

Today’s protests are just the latest in a series of demonstrations to take place in Toronto in the wake of Floyd’s death.

On Friday afternoon several thousand protesters, many of them chanting "I can't breathe,” marched through downtown Toronto as part of a peaceful demonstration.

A vigil was also held at Nathan Phillips Square on Friday night, where residents spoke about their experiences with anti-black racism.

Mayor John Tory has previously said that police are aware of some online chatter suggesting that a group of people intent on “wreaking havoc downtown” could infiltrate this weekend’s protests.

Demonstrators at Nathan Phillips Square have, however, stressed that they want to keep things peaceful.

The only incident so far came when a man in blackface showed up at Nathan Phillips Square.

He was quickly arrested by police for breach of the peace.

“Right now, by all accounts, everything has been peaceful. The messaging is pretty clear. We want the 99.9 per cent of people that are there to show why they are there, to speak about anti-Black racism, to have the time to say that,” Police Chief Mark Saunders told reporters on Saturday afternoon.

“We’ve also asked for them to help. We’ve said look, that’s the message we want put out there, please if others are distracting that message, please help us, let us know who those people are. We will do everything we can to suppress the moments, to allow people to have a peaceful and safe protest.” 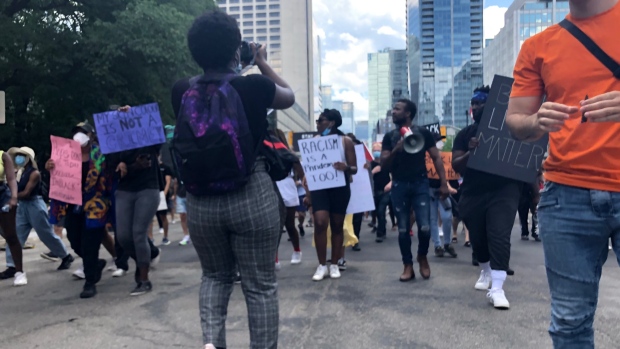 On their way back to Nathan Phillips Square, protesters stopped by Toronto Police Headquarters and took a knee while chanting “hands up don’t shoot.”

Back at Nathan Phillips Square, protesters urged a group of police officers who were monitoring the crowd to take a knee.

The officers obliged, kneeling on the ground as protesters chanted “Black lives matter.”

Insp. Matt Moyer, who took a knee several times during the protest, said he is very proud to be a police officer and to be part of the demonstrations.

"It's very touching because when I do protests and demos, and we're involved, we always stand back and we look at it more from a public safety perspective. Today, I think we became part of a very important movement," Moyer said.

As a father, he said he wanted his son and daughter to stand right in the middle of the crowd and feel welcome just as he felt Saturday.

"I can tell you; I think they would," Moyer said. 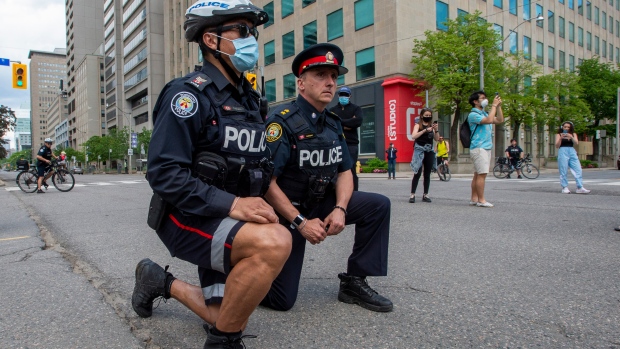 Meanwhile, at another anti-Black racism demonstration, thousands of protesters marched towards Queen’s Park.

The group gathered at Trinity Bellwoods Park at around 2 p.m. Many were carrying signs and chanting “Black lives matter,” and “no justice, no peace.”

Before the march, people knelt on the ground in silence for eight minutes and 46 seconds, which is how long Floyd was pinned down.

“We are all here because we are against racism,” one of the organizers said.

“The Black community is hurting right now, and we need to do our part in supporting our neighbors, our family, our brothers, sisters, everything.”

She stressed that it will be a peaceful protest.

Kim said she watched the video of Floyd, who was at one point heard calling for his mother while struggling to breathe, and she said it was heart-wrenching.

“I feel like our kids deserve a better future. We're just here to walk. By God's grace, this is going to make a difference.” 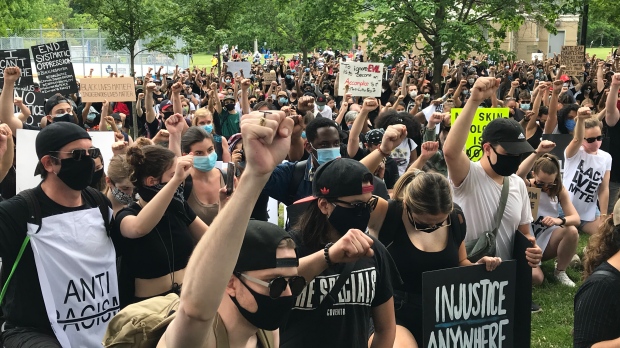 Charmain Emerson said she is at the rally because it’s time for change.

“I am motivated, and I am inspired by honestly, all of the young people that I see coming out at all the various protests that we've had so far,” Emerson said.

“It's a sea of all kinds of faces -- white faces, brown faces, Black faces. We're all coming together to make a difference.”

At Queen's Park, several protesters spoke and shared their experience of racism in their daily lives. Some also talked about actions to fight racism in the community.

One protester said she wrote to Prime Minister Justin Trudeau urging him to do more to support the movement.

The two groups converge just before 5:30 p.m. in front of the U.S. consulate, where protesters and police officers took another knee.

Louis March, the founder Zero Gun Violence Movement, told CP24 the protests in response to the death of Floyd and other Black people in Toronto and all over the world is something he has never seen before.

He said the death of Floyd is the tipping point for many to say enough is enough.

"We've never seen it at this level before, and that is encouraging because maybe it's about time people wake up and realize what has been going on. Not only for the George Floyd murder, but this has been going on for years," March said.

He said Saunders taking a knee sends a message that he understands what the people are feeling at this moment.

"It was not only a message to the public. It was a message to his officers that he's going to work with the community," March said.

"We've heard that in words, we've never seen him take the knee before. Now, we just want to see that translated into real community and policing relationships being improved."

Despite the peaceful nature of all the protests so far a number of downtown retail stores have boarded up their windows in anticipation of large crowds. 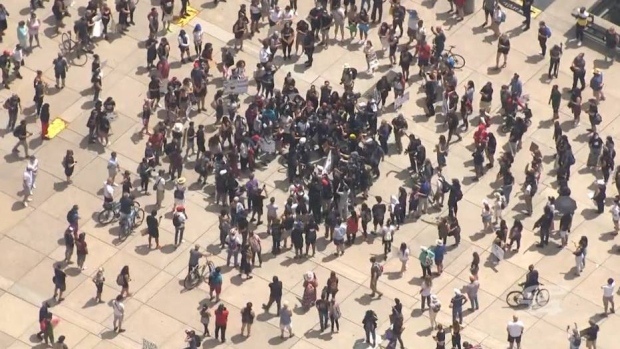 Police have also confirmed to CP24 that special constables were sent to University Avenue on Friday to check for rocks or other objects that could be used as projectiles. Police say that the officers were told to pile the objects up, so that city crews could then remove them from the area.

“It is a normal protocol. We do that all of the time. There is nothing nefarious to it, in fact it is the right thing because we have learned in the past that if you leave things and if people do have a lot of emotion sometimes that can lead to actions and actions that can be regrettable,” Saunders said.

Speaking with CP24 on Saturday morning, Tory said that he has been pleased to see that all of the protests have been peaceful so far.

He said that while he doesn’t plan to personally partake in any of today’s protests, the message being conveyed is one that he believes needs to be heard.

“All the protests so far have been very peaceful and I commend people for that, I thank them for that and I thank our police service for making sure that they helped to keep it all peaceful but it was mostly the people themselves who were heartfelt about the reasons they were there and were very passionate about that,” he said. “I hope everybody remains peaceful today and remains committed to advancing these causes that are so dear to all of us, including me.”