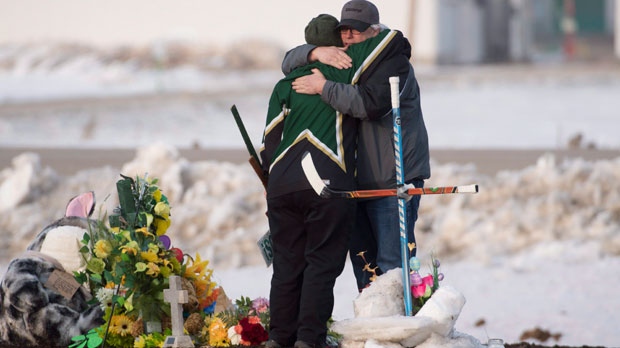 People hug and pay their respects at a makeshift memorial at the intersection of a fatal bus crash near Tisdale, Sask., on Monday, April, 9, 2018. A bus carrying the Humboldt Broncos hockey team crashed into a truck en route to Nipawin for a game Friday night killing 15 and sending over a dozen more to the hospital. THE CANADIAN PRESS/Jonathan Hayward

TORONTO -- When office co-ordinator Jill Batten dons her 2010 Sidney Crosby Team Canada jersey on Thursday, she'll be honouring more than just the 15 people who perished in a Saskatchewan highway crash.

She'll be thinking about a 16-year-old classmate who died in a hunting accident when Batten was a high school student in Grand Bank, N.L., and three other young acquaintances who died in two separate highway accidents roughly 10 years later.

Batten, now 38, says she can't help but think of her own childhood tragedies as she mourns last week's horrific accident near Tisdale involving the Humboldt Broncos junior hockey team, which also injured 14 people.

It's a big reason she's heeding the call of a group of British Columbia hockey moms to wear a jersey as a show of solidarity with victims' families and the tight-knit Prairie community of Humboldt, Sask.

Batten says she's even rallied her entire Dartmouth, N.S., office to wear jerseys Thursday, as well as donate to an online crowdfunding campaign for the victims' families.

"I just know what people experience and go through -- how hard it can be to get over it. Well, not get over it, but deal with it," says Batten.

Thousands of Canadians have pledged online to take part in the so-called Jersey Day, which encourages people to wear a sports jersey, hockey or otherwise.

Jersey Day organizer Jennifer Pinch wants Humboldt to know it's not alone. She's asking anyone who wears a jersey to photograph themselves and post it on social media with .jerseysforhumboldt.

And Pinch expects to see photos from around the world, pointing to global attention to the Facebook plea: "We have (support from) people in Holland, England, China, Australia, Hawaii and all across the United States," Pinch says from Langley, B.C.

A Sobeys Inc. spokeswoman says the company encouraged some 125,000 employees in offices, stores and distribution centres across the country to take part, including staff at Sobeys, IGA, Safeway, Thrifty Foods, Foodland, FreshCo and Lawtons Drugs.

"This will be a show right across the entire company for support. If people don't have jerseys we're also encouraging them to wear green ribbon," says Cynthia Thompson, adding that staff can opt out if they choose.

But southern Ontario's Halton school board was among those to refrain from issuing a directive to staff, students or parents, saying "young, young children" might react differently to a sea of jerseys.

Board spokeswoman Marnie Denton says staff and students can decide for themselves.

"There's been some students that are afraid to get on their school bus, afraid to go on field trips on buses and things like that. So we want to be sensitive to all those concerns," says Denton, adding that the board has acknowledged the tragedy in other ways, including lowered flags.

The heartfelt campaign is among several spontaneous gestures that have exploded into national movements in recent days. They include the fast-rising GoFundMe fundraiser, a campaign to put hockey sticks on front porches, and a spike in organ donation pledges.

Psychologist and grief expert Stephen Fleming, a professor emeritus in psychology at York University, sees them as part of the healing process, in which trauma can be alleviated by "creating meaningful ritual."

When faced with senseless tragedy, these acts can help pull sufferers out of suffocating grief to see larger lessons that may be at hand, he says.

"As soon as I heard about the hockey sticks at the front door I was compelled to do that. Compelled. I went down and got my hockey sticks and brought them to the front door. That was meaningful to me in the face of helplessness," says Fleming, whose private practice is based in Mississauga and Brampton, Ont.

"When I heard about the GoFundMe (campaign), boom, I had to do that. That was meaningful to me."

Addressing grief will be different for every individual, he adds.

The 24-hour news cycle and immediacy of social media has also made heart-wrenching details of the crash and its young victims hard to avoid, says Fleming, suggesting this information age has spurred campaigns in a way that wouldn't have been possible in years past.

Pinch says she just needed to do something. And she suspected others likely felt the same way.

Many have invoked spiritual terms as they described leaving a hockey stick at their door, she notes.

"There are not (as many) churches. People don't have those outlets as much as they did before. And so now, unfortunately or fortunately, it's social media where people come together to get support and to grieve together."

Halifax psychologist Dr. David Mensink says the campaigns are just as important for the participants as they are for the town of Humboldt, noting that when he helps people work through trauma, "the first thing they want to do is help others that have experienced that trauma."

"What you're seeing is human beings who have experienced tragedy in their lives and grief in their lives. They know how it feels and so they want to be supportive and helpful," says Mensink, who counsels at Dalhousie University.

"There's healing in the helping."