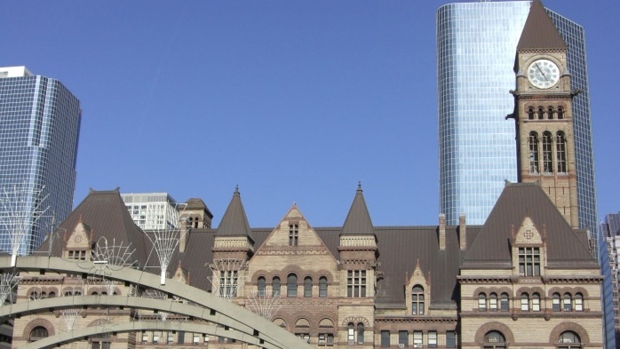 Old City Hall is pictured in this undated City of Toronto photo.

Every spring and fall, John Scott climbs up clock towers across Toronto to change time.

"The keymaster, the time master -- I've been called a lot of titles," says the 61-year-old. "Never the time lord though."

Scott began maintaining and servicing clocks 35 years ago as an apprentice for his uncle C. Arthur Scott at Hamilton-based Scotiabell.

The first time he turned back time was at Old City Hall in the fall of 2006. It's is also the highest clock he works on, with 269 steps.

The hardest part of his job is climbing the towers, he says.

"I have to thank my ancestors for good genes."

The process is a bit different with each clock, says Scott, adding that he begins by looking over the entire installation before tinkering with the time.

"The mechanical ones are like a giant grandfather clock," he says. "One thing you never do -- you never turn a clock backwards."

Moving an hour ahead in spring is easier, he says, because going forward doesn't hurt a clock's mechanism. In the fall, he stops the clocks and spends an hour doing maintenance.

"You go into areas that you normally don't go into when the clock is in operation, like where the pendulum swings."

One of his favourite clocks is at the firehall on Toronto Island. Scott takes a ferry to the island and usually bicycles the rest of the way.

"It's a great joy riding my bike to the firehall."

Changing the time on about a dozen clocks means begining the process on the Friday before the time change at 2 a.m. on the following Sunday, and sometimes takes him until Tuesday to finish the job.

His job is also unlike others working in horology.

"I think there's lots of horologists, jewellers and watch makers," Scott explains. "But tower clock horologists, I'd almost class it's in a different field."

If there is something wrong with a time piece, it has to be fixed in the tower.

"You can't take it out of the tower and take it back into the shop and study it there. Or you're going to be doing a lot of climbing."

Prof. Rhodri Windsor-Liscombe of the department of art history, visual art and theory at the University of British Columbia says clock towers are relics from the late 1800s or the early 1900s as they are not incorporated into new architecture and construction.

Scott says if there is one clock tower he would like to work on, it would be the one on Parliament Hill.

"It's old. It's also a carillon in there. I want to see the carillon," he says.

And in the smartphone age, Scott says mechanical clocks still have a charm of their own.

"The tick tock, tick tock. That just gets me all the time. It's kind of like a heartbeat. It's a living entity almost," Scott says.

"It's a neat feeling when I'm in the clock room and its going tick, tock. Just like my heart. It's actually kind of soothing."