Timeline: A look at Canada's relationship with Iran, before and after the PS752 crash 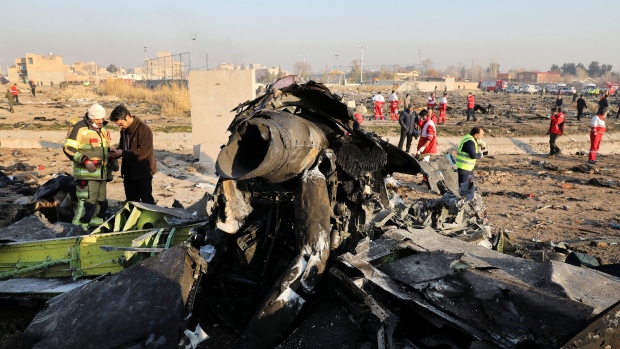 FILE - In this Jan. 8, 2020 file photo, debris litters the scene where a Ukrainian plane crashed in Shahedshahr southwest of the capital Tehran, Iran. More questions than answers remain about the disaster that killed 176 people on board the Ukrainian jetliner, a year after Iran’s military mistakenly downed the plane with surface-to-air missiles. Officials in Canada, which was home to many of the passengers on the doomed plane, and other affected countries have raised concerns about the lack of transparency and accountability in Iran’s investigation of its own military. (AP Photo/Ebrahim Noroozi, File)

OTTAWA -- It has been 66 years since Canada and Iran established diplomatic ties. Those had frayed and been mended many times before the crash of a Ukraine International Airlines flight near Tehran killed all 176 on board, including at least 55 Canadian citizens and more than 100 people with ties to Canada.

Here is a brief timeline of events in the relationship between Iran and Canada:

1979: During the Islamic Revolution, Canadian ambassador Ken Taylor helps shelter six staff of the U.S. Embassy over 79 days. Taylor, with help from the CIA, plans to have the six leave Iran using a cover story that they were in Iran to film a movie.

1988: Canada sends a large team of military observers as part of a United Nations mission to oversee a ceasefire between Iran and neighbouring Iraq following a war between those two nations. The Canadian Embassy reopens.

1990: Canada names an ambassador to Iran, the first since the embassy reopened two years earlier.

2012: Canada closes its embassy in Iran and expels Iranian diplomats in Canada. It severs diplomatic ties over Iran's being found to not be in compliance with a UN Security Council resolution about its nuclear program. Italy assumes the role of Canada's voice in Iran.

The Harper Conservatives list Iran as a state supporter of terrorism and list the Revolutionary Guard and the Quds Force, led by Maj.-Gen. Qassem Soleimani, as terrorist entities.

2015: Canada is the lead sponsor of a UN resolution condemning human-rights violations in Iran.

2016: The Trudeau Liberals announce their willingness to re-engage directly with Iran and possibly restore diplomatic ties.

Jan. 8: Iran launches retaliatory missile strikes on two American military bases in Iraq. One is near the city of Irbil and hosts Canadian special-forces troops, along with a Canadian helicopter unit and dozens of support personnel.

Air Canada reroutes flights out of the United Arab Emirates to avoid flying over Iraq.

Jan. 9: Trudeau and cabinet ministers are briefed on domestic and allied intelligence that the plane was brought down by Iranian surface-to-air missiles, and Trudeau reports the news to Canadians in a news conference.

Iran publicly acknowledges the reports are accurate and says the missiles were fired by accident.

Foreign Affairs Minister Francois-Philippe Champagne speaks with Iran's Foreign Minister Mohammad Javad Sarif, raises Canada's concerns about the crash and says Canada needs to be given access to Iran to participate in the investigation and aid citizens.

The Aircraft Accident Investigation Board in Iran invites the Transportation Safety Board of Canada to attend the accident site in Iran.

Jan. 17: Champagne meets Iranian Foreign Minister Zarif in Oman to discuss the crash and the need for a transparent investigation and what Iran's obligations are to the families of the dead.

Feb. 3: Transport Minister Marc Garneau speaks to Iran's minister of roads and urban development, urging him to turn over the plane's flight recorders. It's a message Garneau and Champagne repeatedly give to Iranian authorities in the coming months but it is more than six months until the flight recorders are downloaded for analysis.

June 23: The Transportation Safety Board says it has been invited by Iran's Aircraft Accident Investigation Board to be present when the flight recorders are downloaded in France the third week of July.

Aug. 23: Iran's investigation board issues a report on its analysis of the data recorders. Champagne and Garneau both issue a statement criticizing Iran for not providing full accounting of what happened in the moments leading up to the missiles being fired, which Iran has claimed was done by accident. Canada says it still needs to be told why the missiles were launched and why the airspace was left open to commercial aircraft.

Oct. 2: Champagne forms a forensic team, as recommended by Goodale, to collect, organize and analyze all available evidence and intelligence about the crash.

This report by The Canadian Press was first published Jan. 7, 2021.