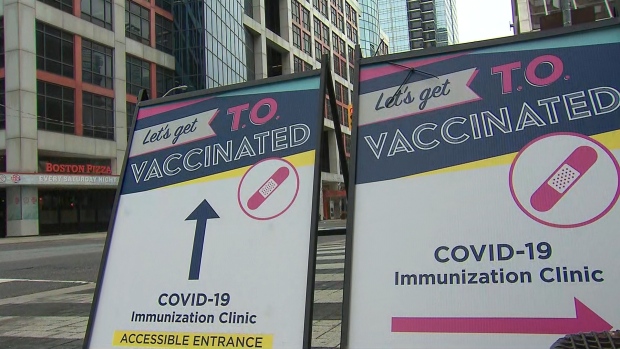 Toronto added thousands of third dose appointments at its mass vaccination clinics for over the holidays this morning but they were all booked up within hours, as the demand for booster shots continues to significantly outstrip the capacity to actually administer them.

Approximately 6,600 appointments at city-run immunization clinics were made available for Dec. 25, 26 and 27 but they were mostly scooped up within hours.

The addition of the new appointments at the city’s five mass vaccination clinics comes one day after third dose eligibility was expanded to include all adults who are at least three months removed from their second dose.

At the time, many people expressed frustration after being unable to find any available appointments for weeks.

“I will just say that the city government is doing everything they possibly can to ramp the capacity up and we will continue to work at that. So if people can stay in touch and check on the availability of appointments through our own but also through some of the hospital and health-care websites and through the pharmacies who maintain waiting lists and have vaccine supplies,” Mayor John Tory told reporters on Tuesday after receiving his booster shot at a city-run clinic in Thorncliffe Park. “It is important, of course, that people should get their third dose as soon as they can.”

Ontario has significantly ramped up its capacity to administer vaccines in recent days and on Monday it was able to administer more than 206,000 doses, the highest single-day tally since mid-July.

However, it is clear that not everybody who wants a third dose will be able to get one right away and public health officials are now urging those who haven’t gotten a booster shot to reconsider plans to gather indoors with vulnerable family members over the holidays.

“I would suggest everybody take a look at their own plans for the holidays and examine each event that you were playing, even a family event, and sort of say ‘How big is it? Is it bigger than it should be? Does it have people included in that that might be more vulnerable in terms of their age or their health situation?’ Please take account of that and err on the side of caution just because I think that's something that's going to help us to get through this holiday period,” Tory said on Tuesday.

The Ontario government has previously said that it hopes to ramp up capacity so that it can administer up to 300,000 doses each day.

Preliminary research has suggested that people who have only received two doses of vaccine will not be significantly protected from contracting COVID-19. But that same research points to the efficacy of vaccines against infection rising to 75 per cent with the administration of a booster shot.