It may not have been the Pride weekend everyone was hoping for—but thousands were still able to dance, sing and celebrate their identity during Toronto’s first ever virtual parade.

The parade typically attracts hundreds of thousands of people to the city each year, but was cancelled as a result of the COVID-19 pandemic.

Instead, the organizers of Pride Toronto organized a series of virtual events, including a version of the much-anticipated parade.

More than 1,400 people logged on to take part in the hour-and-a-half celebration, wishing each other “happy Pride” in the corresponding chatroom. A variety of speakers and performers took part, including Halsey and Alanis Morissette who opened the show and Jully Black, who ended it.

A large number of people sent in pre-recorded statements and videos showcasing their support for the LGBTQ+ community, as well as the anti-Black racism movement.

Toronto city councillor Kristin Wong-Tam was one of the participants and said in her recorded statement that this will be her son’s first pride. She said that while she had hoped he would be able to celebrate “in the streets with his mommas” she looks forward to sharing stories of the community’s resilience.

“When this pandemic is behind us we will come together to fill the streets,” she said “And when we do it will be the loudest most colourful pride celebration this city has ever seen.”

Toronto Mayor John Tory took to social media to encourage everyone to take part in the virtual celebrations, saying that it was “truly the Toronto way of doing things.”

The very first #VirtualPride Parade in Toronto is officially underway! I am so proud of our city for continuing to embrace and celebrate diversity, inclusion and love. This is truly the Toronto way of doing things. Happy #Pride Toronto! pic.twitter.com/nKssz2MDhB

Following the Pride Parade, the livestream switched to show a protest at Nathan Phillips Square organized by the No Pride in Policing Coalition (NPPC) calling for a 50 per cent cut to the Toronto Police Service budget.

The protest is one in a series of demonstrations held in the city following the death of George Floyd in Minneapolis —as well as the deaths of Ejaz Ahmed Choudry in Brampton, Ont. and Regis Korchinski-Paquet in Toronto, Ont.—calling for an end to anti-Black racism and the defunding of the police.

“One of the things that becomes really important is also to stress in terms of the ongoing violence and killings of Blacks, Indigenous, racialized, and Black queer and trans in the city,” organizer Beverly Bain said.

“In the midst of the pandemic where the majority of people who are dying because of the coronavirus happen to be Black and Indigenous people, they are also the people who are being hyper policed and extra judicially policed, and also the same people who are actually being killed at the hands of police and killed in terms of being in crisis when the police comes on the scene.” 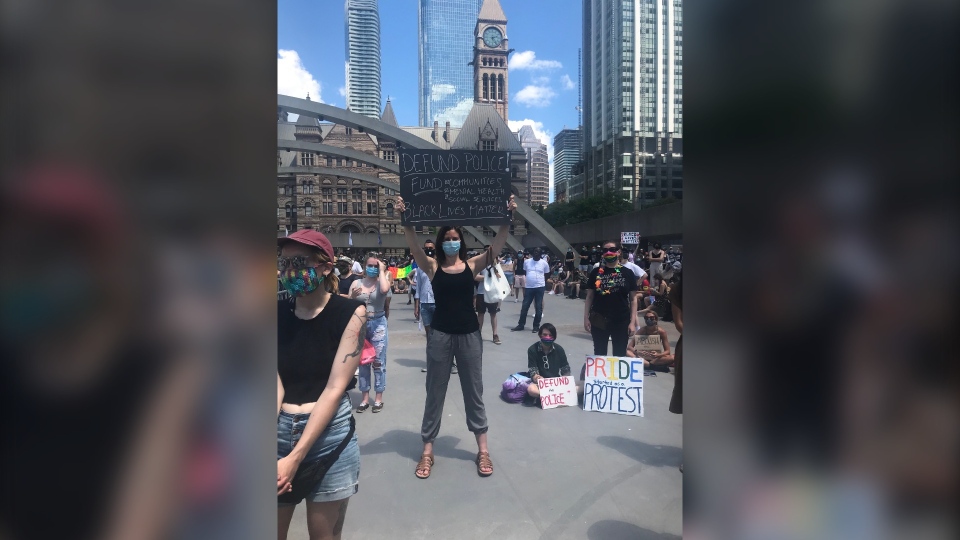 Tory has put forward a motion for discussion at Monday’s city council meeting that will develop a new community safety model to replace the need for police to respond to people in crisis. He says this will ultimately lead to a reduction in their billion-dollar budget.

Among the 18 recommendations includes a plan to equip all officers with body-worn cameras by January.

A separate motion by two city councillors will also call for a 10 per cent reduction in police funding. The roughly $122 million that would be saved would be reinvested into community program.

Gary Kinsman, a spokesperson for NPPC, said that Tory’s motion will just result in some “money switched around” while the 10 per cent cut to the budget is “actually no cut at all.”

“It basically brings the police budget to what it was a few years ago before there were some major increases in funding for it. So it's not what anyone is calling for around defunding the police,” he said. “We say it needs to be cut back 50 per cent and that 50 per cent needs to go to community-directed programs that are responsible to the community for people who've been devastated by police and also devastated by the austerity regimes that happen around us.”

With files from CP24s Bryan Anguilar