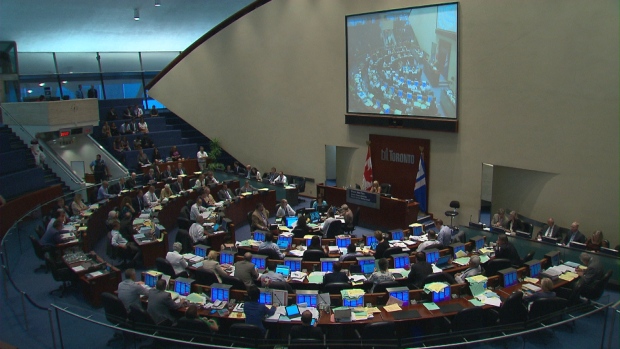 Toronto city council is pictured in this file photo.

City council has voted overwhelmingly in favour of a new 10-year plan that aims to create 30,000 new daycare spaces and ultimately reduce fees by 25 to 40 per cent.

The “Child Care Growth Strategy” sets a deadline of 2026 for the creation of a licensed child care system that could serve 50 per cent of children between 0-4 years of age. The percentage of children in that age range currently served by the city’s daycare system is 31 per cent.

The plan pegs the capital cost of the expanded system at a minimum of $1.4 billion and suggests that the federal and provincial government would foot 80 per cent of that bill ($1.12 billion) while the city would fund the remaining 20 per cent ($280 million).

There would also be ongoing operating costs that would reach $610 million annually by 2026.

An 80/20 split is also envisioned for those operating costs with the city’s share amounting to $122 million a year, according to a staff report.

So far funding has not been formally secured from either the provincial or federal governments. That said the Ontario Liberal government did announce on Wednesday that it would include $200 million in funding in tomorrow’s budget to go towards the creation of 24,000 new child care spaces province-wide, 60 per cent of which would be subsidized. City officials have said that Toronto could receive upwards of $65 million of that funding.

“I believe that childcare is a key element in our ability to build a stronger, fairer and more prosperous city,” Mayor Tory said during Wednesday’s meeting. “This is the right thing to do for families, for social justice and for the economy.”

Council voted 41-1 in favour of the plan following a three-hour debate, with Coun. Giorgio Mammoliti being the lone member to voice objections.

He conceded that many residents are not well served by the current childcare system but he said that is a problem that needs to be addressed by Queen’s Park.

“While many of you believe childcare should be under the scope of the municipalities I don’t. The province needs to come to the table and take care of every child that needs to be cared for,” he said.

While Mammoliti warned that the provincial and federal governments could agree to funding additional childcare spaces and then leave the city stuck with the bill sometime down the road, most other councillors sounded a more optimistic tone on Wednesday.

With that in mind, Davis said that a plan to grow the city’s childcare system is needed.

“We have never had a plan that says this is where we need to go to address the demand and the need," she said,

The staff report says that the population of children under the age of four is expected to grow from 120,000 now to approximately 140,000 by 2026, making the investment in additional child care spaces necessary.

Currently, Toronto's child care system has just under 37,000 spaces for children under the age of four and another 2,900 currently planned for development, meaning that an additional 30,000 spaces will be necessary to meet the 50 per cent threshold by 2026.

The plan calls for the bulk of the new spaces to be created in future years with 5,000 new slots being added each year between 2021 and 2026.

“I think it is an enormous step in the right direction,” Children’s Service General Manager Elaine Baxter-Trahair told council on Wednesday. “It gets a step closer to universal (access).”

Tory has previously called the cost of childcare and the shortage of licensed spaces a “crisis” and on Wednesday many councilors echoed that sentiment.

Coun. Mike Layton, whose wife gave birth to a baby girl in November, 2015, said he spent 18 months on several waiting lists before he finally got a spot for his daughter a month before his wife was due back at work.

“You have to get on a list before you even conceive. That is absolutely ridiculous,” he said.

The motion approved by council directs staff to meet with provincial and federal government representatives to “pursue a tri-government agreement on expanding child care and early learning in Toronto.”

In a speech to her colleague on council, Kristyn Wong-Tam said that the growth strategy should be applauded but she cautioned that it does not fix any problems.

“This is not a transformational report. This is not going to get us to where we ultimately need to be,” she said.

In addition to child care, city council also tackled community housing during their meeting on Wednesday.

Council voted 40-0 in favour of a motion which empowers Tory to ask the province for legislative changes which will allow the TCHC to refuse to rehouse a tenant who has been evicted for “serious criminal activity.”

According to lawyers for the TCHC, there have been about 260 tenants evicted for criminal activity over the last two years, all of whom would have been eligible to be placed in other TCHC properties.

“It’s time to change the law to protect all the people who live in these buildings,” Tory said during the debate. “The notion that we should go on with the status quo in this regard is an abdication of our responsibility.”

During the debate over Tory’s motion, council heard from TCHC staff who said that some tenants who have been evicted due to drug or gun-related offences have then reapplied for housing and have been bumped to the top of the waiting list due to a “disadvantaged clause” that gives priority to those who are otherwise homeless.

Though some members of council raised concerns about residents being evicted because of the activities of a loved one, Tory said he is “pretty certain” that people who are evicted for serious criminal activity after being given full due process are people he doesn’t want back.”

More than 90,000 families are on the waiting list for social housing in Toronto.

“All this means is that the housing corporation would be given discretion for the 270 people out of 10,000 complaints who actually became subject for (eviction) filing for criminal activity,” Tory said.

Council, however, voted 38-2 in favour of an amendment that instead asked city solicitors for further information on how those objectives could be best achieved.