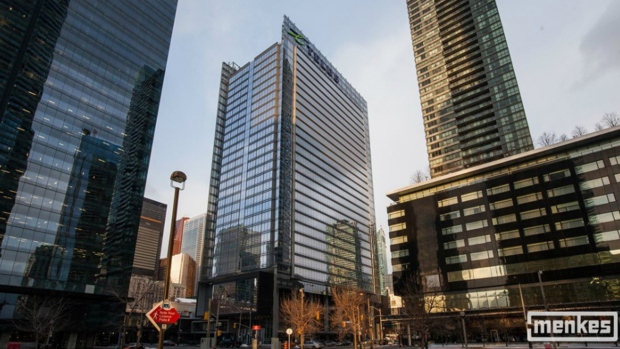 25 York Street is seen in an undated a handout image from Menkes.

A Canadian mining company says it has cleared out of its head office in downtown Toronto for at least nine days after learning that one of its employees tested positive for COVID-19.

One floor of a large office tower at 25 York Street has been shut down to be disinfected after an employee of Kinross Gold Corporation tested positive for novel coronavirus.

The company’s corporate headquarters is located in the building and in a statement released Wednesday evening, the company confirmed that an employee from its Toronto office has tested positive for the virus.

"Kinross values the health and safety of its employees above all other priorities, and as a precaution, closed the Toronto office today for a thorough cleaning and disinfection," the statement read.

"Kinross has asked its employees to work from home until at least March 20th when the need for the closure will be re-evaluated."

The company said the employee was last in the Toronto office on March 3 and is currently at home in "self-quarantine."

The company also confirmed that the infected employee did not attend the Prospectors and Developers Association of Canada (PDAC) conference at the Metro Toronto Convention Centre, which was held on March 1-4, and he had not recently travelled to any Kinross sites.

The company said they have a contingency plan in place to allow head office functions to continue as employees work remotely.

Health officials have confirmed that a Sudbury man who travelled to Toronto to attend the PDAC conference subsequently tested positive for the virus.

Premier Doug Ford and Prime Minister Justin Trudeau are among the more than 23,000 people who attended the conference.

Jamie Okorofsky, a spokesperson for the building’s landlord Menkes, said when they were made aware that an employee of a tenant in the building was diagnosed with COVID-19, Toronto Public Health was contacted.

“As soon as we were made aware of the situation, Public Health was notified and we immediately sanitized the impacted floor and all common areas including elevators and washrooms,” Okorofsky said. “The process is now complete and the building is open.”

Menkes told CP24 there is no isolation of any floor of the building underway, but that if individual tenants wish to stay away from a floor for a period of time that is their choice.

“The building is fully operational – whether our tenants chose to return to work is entirely up to them,” Okorofsky said.

Ontario has 41 confirmed cases of COVID-19, with five patients who have made full recoveries.

Concerns about possible infection have forced temporary closures and disinfections of various buildings in the GTA over the past two weeks, including an RBC office tower in Mississauga, an accounting office in Toronto’s financial district, an elementary school in Toronto’s Rosedale area, a Scarborough condo tower and a North York technical college campus.