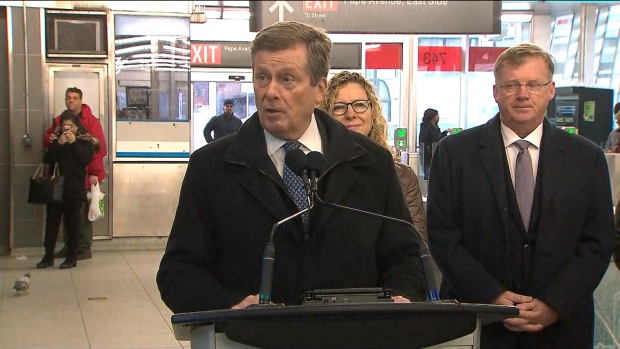 Mayor John Tory has announced a $325 million plan to accelerate construction of the southern portion of the relief line even as the province continues to study a possible takeover of the TTC’s subway infrastructure.

Tory told reporters at Pape Station on Thursday morning that the investment would go towards the cost of speeding up planning and design work and property acquisitions along the route as well as allow the TTC to begin work on acquiring the equipment needed for construction, such as tunnel boring machines.

He said that staff have told him that by doing much of the planning work now, the target completion date of the relief line can be moved up two years to sometime in 2029.

In order to move ahead with the work, though, both the TTC board and city council will have to sign off on an additional $162 million in capital costs in 2019. Approval will also be required for another $163 million in additional costs in 2020, according to a TTC spokesperson. .

“Instead of taking the approach that has been taken in the past where you did everything in sequence we will be doing things in parallel now,” Tory said. “Normally until you reach the 30 per cent design stage you wouldn’t be proceeding with land acquisition, getting boring machines and utility relocates but we are going to move ahead with that work now on the theory that we know we have to build the relief line.”

Line would begin at Osgoode Station

Council has already approved an alignment that would see the relief line begin at Osgoode Station and travel along Queen Street and Eastern Avenue before turning north at Carlaw Avenue and connecting with Line 2 at Danforth Avenue.

Though the money has not yet been allocated for the estimated $6.8 billion capital cost of the project, Tory told reporters that a substantial amount of funding can be put towards the project from the $4.8 billion that both the federal and provincial governments have committed to Toronto transit infrastructure over the next decade.

“People keep saying that it is not funded but we have sufficient funding from the federal government that is to be matched by the provincial government and we will take steps necessary to make sure we (the city) can contribute our own share of the funding,” he said. “So the project is not unfunded. It is not completely funded as of yet but certainly there is enough funding there and certainly there is a determination on the part of the people and the mayor and the council that this project is going to get built.”

TTC staff have long identified the relief subway line as the city’s biggest transit priority due to the overcrowding that exists along the Yonge subway line and in recent months there has been increasing momentum behind the project.

A number of public consultations were completed on the chosen alignment for the route in the spring and in October the province gave the project the green light following an environmental assessment.

Nonetheless, much uncertainty continues to exist due to ongoing efforts by the Ontario government to examine a takeover of the TTC’s existing subway infrastructure and responsibility for the planning of future subway lines.

Speaking with reporters, Tory said that he did give his counterparts in Premier Doug Ford’s government advanced notice of his intent to speed up construction of the relief line and found that they were “quite content.”

“What the city does matters very much and I think it is grossly premature to say that anything has been decided as to what is going to happen,” Tory said. “The one thing I know for sure is that we have the responsibility today as of this minute and for the foreseeable future in terms of the next number of months if not longer to build these transit projects.”

Officials estimate that the south portion of the relief line will divert about 2,500 commuters per hour from Line 1 and significantly reduce overcrowding at busy interchange stations like Bloor-Yonge and St. George.