An integrity complaint has been filed against Toronto Mayor John Tory for not declaring an alleged conflict of interest when commenting and voting to end the ActiveTO program given his ties to Rogers Communications.

Toronto resident and civic activist Adam Chaleff provided documents to CP24, stating that he has filed a complaint with Toronto’s Integrity Commissioner about Tory’s public comments and vote to end the program on Lake Shore Boulevard West.

Chaleff alleges that Tory contravened sections of the Municipal Conflict of Interests Act (MCIA) by discussing and voting against extending the outdoor program after the Blue Jays, who are owned by Rogers, publicly said ActiveTO was impacting their business.

Tory is a shareholder of Rogers Communications and has a long personal history with both the Rogers family and telecom giant, where he ran two different subsidiaries in the 90s.

“This sequence of events gives rise to concerns that Mayor Tory violated sections 5, 5.1 and 5.2 of the MCIA. The Integrity Commissioner has a duty to conduct an inquiry into the matter and utilize the powers of investigation in Part V of the City of Toronto Act, 2006,” the documents state.

The Integrity Commissioner, Jonathan Batty, is an independent officer who oversees the conduct of elected and most appointed officials in Toronto. The commissioner also conducts investigations into allegations about breached standards.

Tory says the commissioner’s office has not yet been in touch with Tory about the complaint, and that he first heard about it through a media inquiry from the Toronto Sar.

Tory added that the matter has been a broad-based discussion and that he has followed the rules while addressing it.

“I follow the rules. I think people trust me to follow the rules. I've done it, you know, in a very deliberate manner over the time that I've been mayor. And the Integrity Commissioner, I respect a great deal and he has not yet been in touch with me about this,” Tory told CP24 Wednesday morning.

In the summer of 2020, the city implemented ActiveTO, which closed off select city streets, including Lake Shore Boulevard West, to vehicle traffic on weekends in order to give pedestrians, cyclists and runners space to physically distance amid the COVID-19 pandemic. 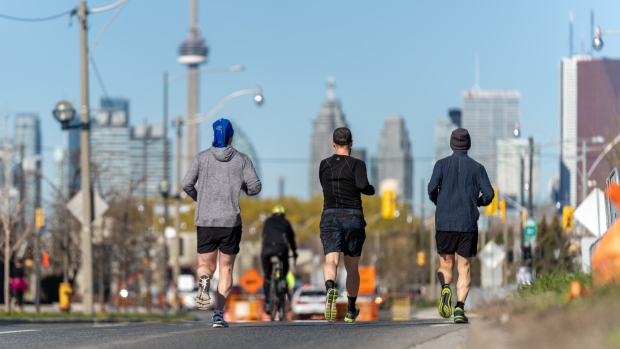 While some residents enjoyed the car-free road experience, others expressed their frustrations with rising levels of traffic, particularly in recent months as more people are commuting into the city due to improved pandemic conditions.

In June, Tory said council had received a report from city staff about the impacts of the program on vehicle traffic on weekends.

Tory spoke publicly on the matter and said that the program would not be eliminated entirely, but instead will demonstrate a “balance” between easing traffic flow and continuing car-free streets at times.

“I have the traffic data. There’s no question that it had a bigger adverse impact on traffic during that time,” Tory told CP24 on June 8. “All I can say is we are very carefully examining all of those results, data, and actual real evidence as opposed to stories.”

In light of the news about council considering changes to ActiveTO road closures, Toronto Blue Jays President Mark Shapiro sent a letter to the mayor and city staff asking for council to not vote in favour of extending the program on Lake Shore Boulevard West.

“The Toronto Blue Jays are a major sports franchise that draw millions of fans to Rogers Centre every season. Given the unprecedented levels of construction and other diversions in downtown Toronto, removing one of the only ways into and out of the downtown core would be extremely challenging to our fans, who rely on these routes to attend our games,” Shapiro wrote in his letter on June 6.

On June 15, council reviewed city staff’s traffic data and recommendations, and voted to limit the number of ActiveTO closures on Lake Shore Boulevard West this summer.

Instead of recurring weekend closures, the closures will be "limited special events” and will be based on several factors, including the number and location of planned street events in the city on a given weekend.

Chaleff’s complaint argues that Tory had a conflict of interest in the matter and that he shouldn’t have spoke publicly about it or vote to end the program, given his involvement with Rogers.

“As a member of the Rogers Control Trust Advisory Committee, Mayor Tory has an indirect pecuniary interest in any matter that affects the finances, economic prospects, and/or property value of the Toronto Blue Jays and the Rogers Centre, and was required to declare this interest,” the documents state.

Municipal lawyer John Mascarin says the complaint appears valid but the commissioner's office will have to decide whether Tory's actions were reasonable.

"Mayor Tory, I just heard, he's indicated it's a broad-based interest and that's one of the concerns that the court would have. They would say 'hold on, would a reasonable person be likely to think that the mayor was influenced in making his decision one way or another because of Rogers,' and I think ultimately, I think the reasonable person would say I don't really think so," he told CP24 Wednesday afternoon.

The mayor’s office says it won’t make further comments about the matter as it’s before the commissioner.

“We respect the Integrity Commissioner and we won't be making any further comment about this while the complaint is in front of him beyond what we said at the time: This vote was about a City program that the Mayor introduced and championed throughout the pandemic and this was a very broad public issue involving all road users in the city,” Tory’s Executive Director of Communications Don Peat said in a statement.