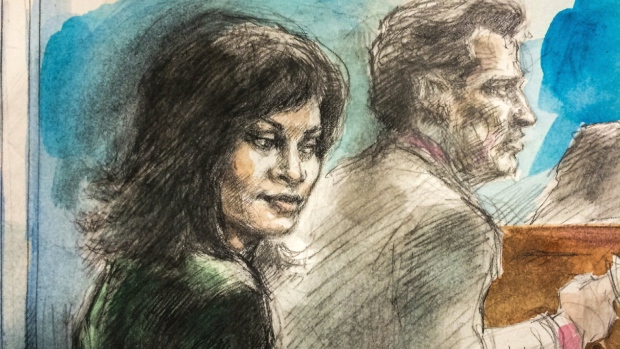 The murder trial for a woman accused of fatally stabbing a 28-year-old newlywed in Toronto’s underground PATH system is expected to begin next January.

Rohinie Bisesar, 41, who has been charged with first-degree murder in connection with the December 2015 death of Rosemarie ‘Kim’ Junor, appeared in a Toronto courtroom Wednesday for a pre-trial hearing.

Junor was stabbed to death at a drug store in the underground PATH beneath Bay and Wellington streets on December 11, 2015.

Police previously said they believed the stabbing was random and unprovoked. They also said the accused and Junor did not know one another.

The Crown will be requesting Bisesar undergo a psychiatric assessment to determine whether the accused could be deemed not criminally responsible in the case.

In court Wednesday, Bisesar said she is not responsible for Junor’s death.

“There is something interacting and controlling my body and that is why this has happened,” she said.

“Yes that was my body doing it but it wasn’t me.”

Bisesar, who has fired two lawyers, is scheduled to return to court next week to provide an update about the status of her representation.

The judge overseeing the case said he would like the murder trial to begin on January 8, 2018.

Speaking outside the courthouse Wednesday, the victim’s brother, Richard Junor, told reporters his family is trying their best to keep it together following his sister’s death.

“My mom, my dad, my whole family, obviously, it has been a trying time for all of us,” he said.

“It’s just devastating to know that she is gone.”

Bisesar’s next court appearance is scheduled for Feb. 13.