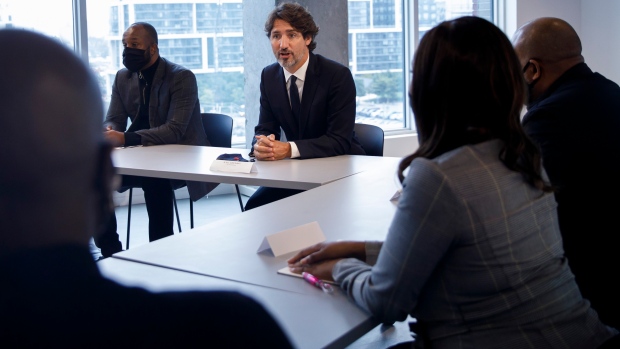 OTTAWA -- Black Canadians who want to start or expand a business will have access to loans and supports for training and mentorship under a new federal program unveiled by Prime Minister Justin Trudeau in Toronto Wednesday.

The $221-million program, jointly funded by the federal government and eight financial institutions, is the first of its kind to help Black businesses on a national scale. It responds to one of the requests made in June by an open letter from the Parliamentary Black Caucus that was signed by more than 100 MPs and senators.

It is also the first sign of any policies to address systemic racism since Trudeau promised in early July that doing so was a priority for his cabinet.

Trudeau said Wednesday the COVID-19 pandemic has put a spotlight on the systemic gaps and economic barriers Black Canadians face every day, and that his government wants a pandemic recovery that is "inclusive and equitable for all Canadians."

Ottawa is putting up $93 million over the next four years for the Black Entrepreneurship Program, while banks are contributing up to $128 million for loans between $25,000 and $250,000 for Black business owners. The participating banks are RBC, BMO Financial Group, Scotiabank, CIBC, National Bank, TD, Vancity, and Alterna Savings.

The federal cash will include $33 million towards the loans, $6.5 million to collect data on the barriers preventing Black Canadians from succeeding in business, and $53 million for Black business organizations to provide mentorship, financial planning and business training.

Trudeau made the announcement at a Toronto organization called HXOUSE, which describes itself as a "think centre" to help foster innovation and opportunities for young talents in Toronto. HXOUSE, (the X is silent), gets its unique name from the XO label of Grammy-winning artist The Weeknd, who launched the centre in 2018 along with his creative director, La Mar Taylor, and Ahmed Ismail, owner of the marketing firm Influencers PR.

Ismail said Wednesday the new program is a welcome sign of a government acknowledging systemic racism exists, addressing the fact opportunities are not equally available, and taking "the uncomfortable step of doing something about it."

"This is something I've never really witnessed in all my life in any country that I've studied," said Ismail, who was born in Somalia and has also studied and worked in the United States.

Liberal MP Greg Fergus, the chair of the Parliamentary Black Caucus, said the program isn't all that is needed but will help Black Canadians be economic actors, community leaders and see "that we are full Canadians and want to participate in this wonderful country that we call home."

"It will not in one fell swoop eliminate all systemic discrimination and the consequences but we've taken a positive step forward," he said.

Systemic racism across Canadian institutions, governments and communities took centre stage in the spring, after the police killing of George Floyd, a Black man who died in Minneapolis after a white police officer knelt on his neck for more than eight minutes. Three other officers are charged with aiding and abetting in the death, after allegedly not doing anything to stop it.

His death became a lightning rod for racialized Americans to demand change, leading to hundreds of protests around the United States. Similar protests erupted in Canada, where the focus also included the treatment of Indigenous Peoples.

On June 6, Trudeau attended a Black Lives Matter protest on Parliament Hill. A month later, he said he was assigning his cabinet to spend the summer working on multiple plans to address systemic racism. That included policing, the justice system and improving access to capital for racialized Canadians and Indigenous Peoples.

He also campaigned on a promise to strengthen and double the funding for the national anti-racism program his government announced in 2019. Trudeau himself was forced to apologize during the campaign after photos emerged of him wearing blackface several times as a teenager and in his early 20s.

The $45-million Building a Foundation for Change program includes funds to tackle racism in the civil service, develop an anti-racism secretariat and start gathering more specific data on systemic racism in Canada.

There has been no announcement yet to make good on the promise to double the program's funding. The new entrepreneur program announced Wednesday is the first policy to come from cabinet's summer assignment to tackle racism. Trudeau said it is a "significant economic empowerment" program but said there are more announcements coming.