Trudeau not the only millionaire in leadership race 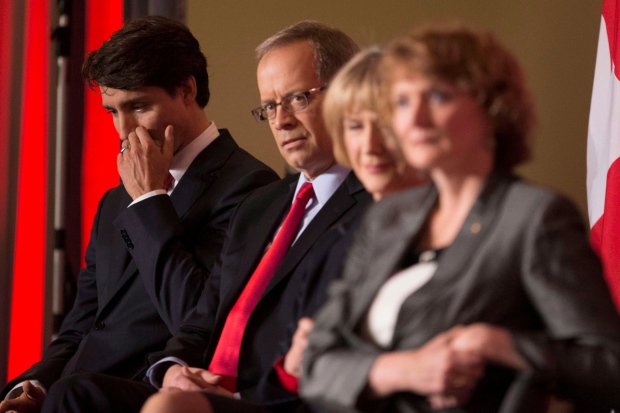 OTTAWA -- Justin Trudeau isn't the only millionaire in the Liberal leadership race.

He may not even be the wealthiest of the nine contenders.

On paper at least, that title may well belong to Joyce Murray -- which will likely come as a surprise to rival George Takach, who has portrayed the Vancouver MP as a lefty tree hugger who knows little about business or creating "real jobs."

According to Murray's campaign, her net worth, along with that of husband Dirk Brinkman, is about $5 million -- the vast majority of which is tied up in their business, Brinkman and Associates Reforestation Ltd.

The company, which Takach has compared to a student house-painting business he once operated, employs more than 1,000 people in five countries and grosses about $30 million in revenue per year, according to Brinkman.

Still, Brinkman stresses that he and Murray are not rolling in dough. Their company's profits are mostly reinvested in environmental restoration projects, some of them undertaken for free for First Nations and others.

"We're not formally a social enterprise but we do tend to take any profits we're making and look at where can we do something," Brinkman said in an interview.

"We're not wealthy," said Brinkman. "If you were to look at our home here, it looks more like a cottage than it looks like a big home, though it's a comfortable home."

Comfortable would seem to be the word to describe all of the main leadership contenders, who agreed to disclose varying degrees of detail about their financial status.

The Canadian Press sought the information after Trudeau voluntarily disclosed details of his $1.2 million inheritance from his famous father, former prime minister Pierre Trudeau. He also revealed details of his profitable public speaking career, which earned him more than $1 million over six years -- including $277,000 in the four years after he became an MP in 2008.

Trudeau's wealth triggered a potentially game-changing moment during the last all-candidates debate, when Martha Hall Findlay questioned how the Montreal MP can understand the challenges facing middle-income Canadians given his privileged upbringing. She was booed for her efforts and apologized the next day.

Hall Findlay herself has since confessed to having an "affluent" early upbringing that allowed her to attend a tony private French school in Toronto and pursue the expensive sport of competitive skiing. However, at age 12, her parents separated and she moved with her mother and two of four siblings to an orchard in rural Ontario so that she and her brother could continue to ski.

"It was an eye-opening, wonderful, life-changing experience for a 'used-to-be-well-off' kid from the city and one that has shaped a lot of who I am," Hall Findlay said in an email.

By the time she was 26, Hall Findlay said she had two degrees, three kids under five, a big student debt and had "learned a great deal about struggling to make ends meet."

She went on to become a "successful lawyer, executive and entrepreneur" who now works part-time at the chief legal office of EnStream LP while serving as part-time executive fellow at the School of Public Policy at the University of Calgary.

However, in an interview, Hall Findlay was not willing to disclose details of her current financial status.

"You don't need specifics," she said. "I am certainly not affluent but I am happily comfortable after helping put three kids through university and pursuing politics.

"I can guarantee my net worth is not the same as (Trudeau's or Marc Garneau's) -- not that it's an issue," she added with a laugh.

Montreal MP Garneau's assets total "more than $1 million," according to a campaign spokesperson "but he would have to sell his home to realize that and he has no plans to do so."

Garneau inherited nothing from his father, a brigadier general in the army, according to his spokesperson. His education was financed by the navy, in which he was a captain earning about $100,000 a year, and academic awards.

He collects a pension from both the navy and the federal government, for his space agency service. He and his wife jointly hold two investment accounts and have a small mortgage on their Montreal home.

Takach, a Bay Street technology lawyer, was born to "penniless" immigrants and raised by a single mother, according to a campaign spokesman, who noted that candidates are not required by law or party rules to disclose anything about their personal finances.

Still, the spokesman allowed Takach is probably a millionaire now, "in terms of his assets," which include "investments in stocks and real estate to provide for his retirement."

Takach earned himself some boos at the last leadership debate when he disputed Murray's description of herself as a businesswoman.

"Joyce, I've worked with a lot of start-ups. They don't just plant trees," he scoffed.

At another point in the debate, while discussing youth unemployment, Takach said: "For young people, it's not enough to simply say, 'Hey, you can go out and you can plant trees over the summer.' We need real jobs. Real serious jobs."

As it happens, Murray, the daughter of immigrants from South Africa, paid her way through university by planting trees in the summer, earning about $200 a day at the back-breaking job. She met Brinkman on the job and they eventually formed their own company.

In a 1976 National Film Board documentary, Do it with Joy, Murray, Brinkman and their tree-planting crew look like a bunch of bushy-haired hippies, yet Brinkman says nothing could be further from the truth.

"We hated being called hippies. The characterization of hippies has to do with unambitious, laid back, smoking dope, whatever. Not us."

Indeed, Brinkman said they didn't allow meat or caffeine in camp, much less drugs, and they were "definitely workaholics," planting 3,000 trees a day. It's "ergonomically, the hardest work ever studied on the planet," he said, using 65 per cent of a planter's cardiovascular capacity -- equivalent to that used by an Olympic marathon runner -- eight hours a day, often amid swarms of black flies and harsh weather conditions.

In her day, Murray was "the fastest female planter anyone had ever seen in B.C." and she kept it up for five years until she was "too pregnant" to continue in 1978, Brinkman said. She became the company's business manager, a position she retained until she entered B.C. politics in 2000.

Brinkman now holds Murray's shares in the company "in trust."