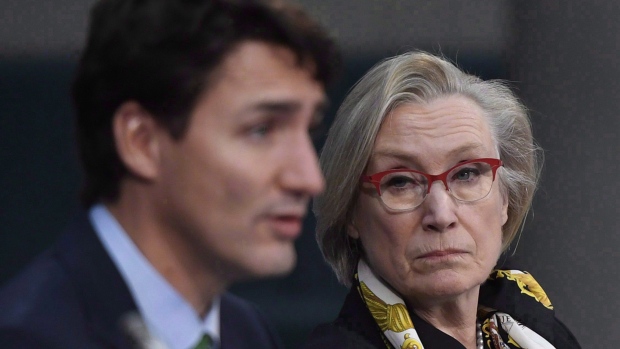 OTTAWA - Prime Minister Justin Trudeau is resisting calls to fire Crown-Indigenous Relations Minister Carolyn Bennett over a text message he acknowledges was “wrong” and “hurtful” and harmed his government's progress on reconciliation.

Bennett apologized Thursday for texting “Pension?” to Jody Wilson-Raybould in response to the Independent MP's tweet urging Trudeau to quit “jockeying” for an election in light of the discovery of what are believed to be 715 unmarked graves of Indigenous children in Saskatchewan.

Members of Parliament must serve for six years before becoming eligible for a pension, so Bennett appeared to be suggesting that Wilson-Raybould, who is Indigenous, was only concerned about losing her pension if she were voted out before she hits the six-year mark in October.

“Of course, I'm deeply disappointed. She did the right thing by apologizing because it was the wrong thing to do,” Trudeau told a news conference Friday.

“As a government, as ministers, as Canadians, we need to be focused on the work that needs to happen for Indigenous people across this country who have been going through extremely difficult times, not just in these past weeks but over years and generations.”

He added: “Mistakes like this are hurtful and nudge us in the wrong direction instead of steadily moving in the right direction.”

Trudeau's government has faced intense scrutiny over its handling of Indigenous issues since the discovery of an unmarked burial site at a former residential school in British Columbia last month. Thursday's news of more graves at a Saskatchewan institution has magnified the public concern.

Wilson-Raybould tweeted a screenshot of Bennett's text message on Thursday. The Vancouver Granville MP said it was racist, misogynistic and reflected the stereotype that Indigenous people are “lazy & only want $.”

Bennett issued a swift apology on her Twitter account, saying she let “interpersonal dynamics” get the better of her and had apologized directly to Wilson-Raybould for the “insensitive and inappropriate” comment.

Trudeau said he spoke with Bennett Friday morning and he knows her “heart” and how hard she has worked for years on improving Canada's relationship with Indigenous Peoples.

“We both understand that there is now even more work for her to do and I know we will do it together,” he said.

“On a day when Canadians were grappling with the discovery of hundreds of more bodies in unmarked graves, the minister took a cheap, derogatory stab at an Indigenous leader grieving for these lost lives,” Angus said in a statement.

“You can't say reconciliation is a priority while tolerating this kind of behaviour from your minister. If anything, Prime Minister Trudeau highlighted the fact that he will say one thing and act in a completely different way.”

The Union of BC Indian Chiefs has also called on Bennett to resign, saying it is “deeply disturbed and disgusted by the extreme callousness, spite, and ignorance you have shown through the racist message.”

“With a single word - 'pension' - you not only decided to perpetuate a damaging racial stereotype, that Indigenous peoples are lazy and only financially motivated - but dismissed the pressing, overarching issue of residential schools, missing and murdered children, and Indigenous rights.”

Wilson-Raybould was appointed by Trudeau as Canada's first Indigenous justice minister. In 2019, she resigned as a cabinet minister and was later booted from the Liberal caucus after she called out the prime minister for pressuring her to secure a deferred prosecution agreement for SNC-Lavalin.

In August 2019, the federal ethics commissioner concluded that Trudeau violated the Conflict of Interest Act by improperly pressuring Wilson-Raybould to halt a criminal prosecution of the Montreal engineering giant on corruption charges related to contracts in Libya.

Wilson-Raybould was re-elected as an Independent MP in October 2019.