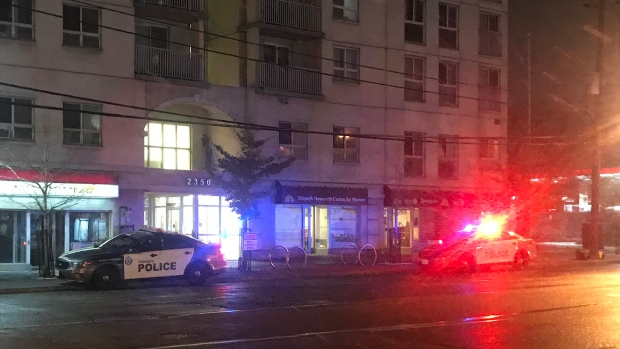 Police are seen outside an apartment building at Finch Avenue West and Weston Road on Nov. 8, 2019 after a 14-year-old girl was shot. (Mike Nguyen/CP24)

Two youths are in custody after a 14-year-old girl was shot in the legs at an apartment in North York last week.

Police were called to a building in the area of Finch Avenue and Weston Road at around 12:45 a.m. Friday after a firearm was reportedly discharged inside an apartment.

When officers arrived on scene, a 14-year-old girl was found in the lobby of the building suffering from gunshot wounds to both of her legs.

She was transported by paramedics to Sick Kids hospital for treatment.

Police say they believe the girl was with five males inside a unit in the building when a handgun went off.

According to police, a single bullet went through both of the teen’s legs.

As she made her way to the lobby to seek help, police say the other occupants of the unit fled the scene.

On Wednesday, police confirmed that two people have now been arrested in connection with the incident, which has been deemed to be an “accidental discharge.”

The two accused cannot be identified under the Provisions of the Youth Criminal Justice Act.