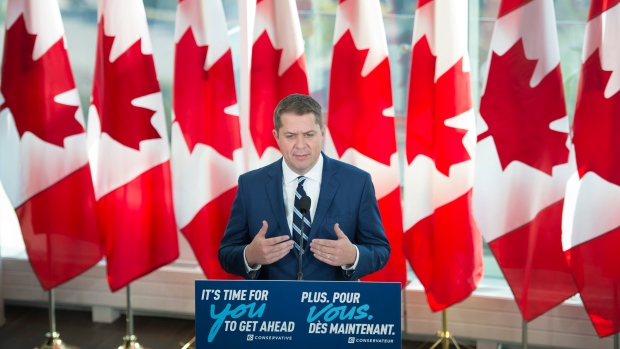 OTTAWA - Andrew Scheer wants the world to know the Conservatives would bring Canada back - in a very different way.

“It's time for Canada to put our money where our mouth is and only use foreign aid to support the Canadian values we hold dear,” Scheer said Tuesday in Toronto as he talked about how a Conservative government would handle international affairs, including development assistance.

Liberal Leader Justin Trudeau came to power four years ago saying Canada was ready to return to a position of leadership on the world stage, a message aimed at those at home and abroad - including other leaders at the United Nations - who believed the country had stepped away from that role under the previous Conservative government of Stephen Harper.

That argument was put to the test by Scheer on Tuesday, as he read out what sounded like a greatest-hits list of the biggest controversies the Trudeau government has faced in the realm of global affairs: Trudeau's trip to India, which included inviting a convicted attempted assassin to dinner; the warm words to mark the death of Fidel Castro, the ex-president of Cuba; and the $10-million compensation payment to Omar Khadr.

The Conservatives, Scheer said, would turn Canada in a different direction - including inward.

“(Canadians) deserve a prime minister who will do everything within their power to return Canada to a place of honour and leadership around the world, while doing more to help hard-working families right here at home get ahead,” said Scheer.

The Conservative leader noted his foreign-policy announcement came on a day the party leaders would have been comparing and contrasting their positions and records on the issue onstage, in an event the Munk Debates had organized on the topic.

The organizers cancelled the debate last week, after Trudeau declined to take part.

The central plank in the Conservative announcement is a pledge to decrease foreign-aid spending by 25 per cent.

The plan includes cutting out funding for countries the Tories consider hostile regimes, or as having too much money to need the help.

The Conservatives would also redirect $700 million to countries with the greatest need, focusing on support for children in conflict zones.

“The vast majority of Canada's foreign aid is well-spent on humanitarian assistance to countries mired in structural poverty or facing a humanitarian crisis,” said Scheer, “but under Justin Trudeau, a significant chunk of Canadian foreign-aid money does not fit that description.”

The proposal echoes those of governments past. The Liberal government of Jean Chretien targeted nine countries, mostly in sub-Saharan Africa, for its international-development efforts beginning in 2002. The Harper government similarly focused on 20 countries beginning in 2009, which critics argued were chosen to reflect trade and investment priorities rather than need.

Canada is campaigning for one of two seats on the United Nations Security Council, for a two-year term that would begin in 2021.

The Harper government was heavily criticized for its unsuccessful effort to win a seat on the council in 2010 and Canada did not try again until after the Liberals took over.

Canada now faces a tough fight from Norway and Ireland in the UN vote, which takes place next June.

Asked whether his proposed cut to foreign spending would hurt Canada's bid for the UN seat, Scheer said he was confident allies would recognize the country's contributions to peace and security.

At the same time, Scheer suggested securing a spot at the UN table would not be a priority for a Conservative government.

“It's more important to me that I help Canadians get ahead than curry favour at the United Nations,” Scheer said, later specifying he would not be sending any foreign aid to middle- and upper-income countries in an effort to secure support for the bid.

Trudeau, who was meeting with mayors from the Greater Toronto Area about his gun-control policy Tuesday, linked the proposed Conservative cuts to their climate-change policy, which emphasizes reducing greenhouse-gas emissions in other countries.

The Conservative climate-change plan includes a proposal to market Canadian products to help reduce emissions overseas, as well as exporting Canadian oil and gas as a cleaner source of energy than coal.

Trudeau also defended Liberal investments in foreign aid, although he would not commit to increasing spending to reach 0.7 per cent of GDP, which is a target the United Nations set in 1970.

Trudeau also said U.S. President Donald Trump has never asked Canada to do him a favour involving his political interests.

Trump faces an impeachment probe in Congress related to his efforts to get the Ukrainian government to investigate former U.S. vice-president Joe Biden, now a candidate in the Democratic presidential primaries.

Singh also said that if Scheer is trying to find ways to pay for his promises, then cutting foreign aid is going about it the wrong way.

“The fact that he is talking about cutting foreign aid is a distraction,” he said in Vancouver. “He is missing the point. He is missing the whole plot here. We've got massive inequality in our country and we have to ask those at the very top, the ultra rich, to pay their fair share.”

This report by The Canadian Press was first published Oct. 1, 2019.