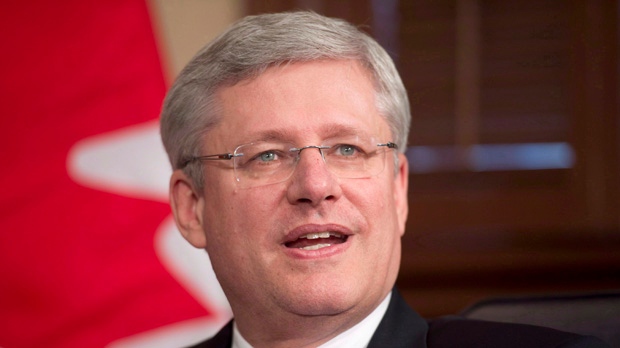 Prime Minister Stephen Harper speaks to the media in his office in Ottawa on Thursday, June 26, 2014. (The Canadian Press/Adrian Wyld)

OTTAWA -- A group of angry veterans, who want the Harper government defeated in the next election, is appealing to serving members of the military to join them in protest.

Ron Clarke, a member of Canada Coalition for Veterans who has been campaigning against the closure of Veterans Affairs offices, made the appeal Wednesday during a Parliament Hill news conference.

It may put those in uniform in an awkward position, but Clarke says they need a government sensitive to veterans and their needs.

"We need a government that looks after our veterans," he said.

The plea is just the latest move in what is a major rift in the veterans community, one that has the potential of undermining the coalition's aim of galvanizing votes against the Conservatives.

Last week, a group of outspoken veterans advocates announced that six organizations had formed a coalition that would, at a minimum, boycott government announcements and photo-ops.

The coalition says a low-key approach to confronting the government has not worked and spokesman Mike Blais says the Royal Canadian Legion seems satisfied with current disability awards for the most severely wounded troops.

Soldiers injured in combat are eligible for a one-time, lump-sum payment for non-economic loss that ranges up to $350,000.

"The Legion believes $350,000 is OK and the consultation group they have formed believes that's OK. We do not," said Blais, who is president of Canadian Veterans Advocacy. "We have done extensive consultation with those who have suffered the consequences of war in Afghanistan. I have spoken to memorial cross mothers and those who are suffering."

Blais argues -- as does a group of Afghan veterans in a lawsuit against the federal government -- that the old system of pensions for life was more generous than the new veterans charter, introduced by the Liberals, but fully embraced by the Harper government in 2006.

Scott Ferris, a spokesman for the Legion, denies his organization is satisfied with the charter and points to a national letter-writing campaign that was started in late October, calling on members to buttonhole their MPs and demand change.

He also denied the Legion is happy with the current lump-sum benefits, saying it supports an increase to the level of civilian court awards, which statistics suggest are more than one-third higher than what soldiers receive for lost limbs and pain and suffering.

Veterans receive a host of other income support that in theory would match what an individual received under the old system, but Blais said it's a false narrative.

"Our men and women served in harm's way. We cannot compare their sacrifice to a workplace injury," he said.

The infighting is counterproductive, Ferris said.

"It is regrettable that there is this difference of opinion emerging, because the Legion fully believes that all veterans organizations have the same goal," he said. "We all want the highest level of care and benefits for those who've served."

A spokeswoman for Veterans Affairs Minister Julian Fantino noted that a House of Commons committee concluded in a report last June that the majority of veterans are "well served" by the system.

The all-party veterans committee unanimously endorsed a series of recommendations, but opposition parties pulled their support in September when the government's response failed to live up to expectations.

Once the election is called, Clarke said, he intends to drive across the country to each of the nine districts where Veterans Affairs closed offices last winter to rally opposition to the Conservatives.

He calls it the "ABC Campaign"-- the Anything But Conservative. It's a nod to former Conservative Newfoundland premier Danny Williams, who in 2008 launched his own ABC campaign against the Harper government over a broken equalization promise.