'We were helpless and hopeless,' Toronto man spends eleven weeks in hospital with COVID-19 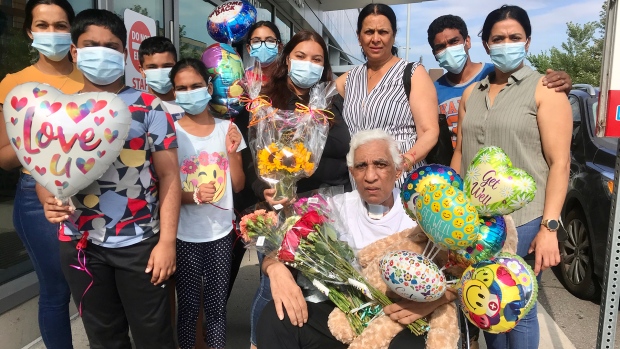 Ramchand Ramdhine (seated, lower right) leaves Humber River Hospital in the company of much of his family after a prolonged fight with COVID-19. (Soma Ramdhine)

The novel coronavirus took an active, working 63-year-old family man and "aged him 10 years," leaving him unable to work or do basic tasks for himself, prompting his family to warn Torontonians not to get complacent as more spaces reopen.

In April, Ramchand Ramdhine was working at a UPS depot in Vaughan, and was the picture of health for a man his age, his daughter Soma said.

He came home to his wife on April 28 suffering from what he thought was a cold.

"He didn’t have a fever, but he was feeling unwell, as if he was coming down with a cold," Soma said.

Two days later, he went to a COVID-19 drive-in testing centre but was turned away, with staff saying his symptoms were not similar enough to those commonly associated with COVID-19.

His daughter then took him to Humber River Hospital for a test, but they had run out of kits for the day.

So Soma took him again on May 1, bright and early in the morning before she went to work.

"By the time I got off work (that day) – he was in bed with chills and fever."

On Friday, May 1, he went to Humber River Hospital's emergency room and was discharged and given amoxicillin for what Soma was told was "COVID-developed pneumonia."

Over the next weekend, Soma said her dad struggled to do normal things like eating meals or showering.

By Tuesday, May 5, he couldn't leave bed, his blood pressure was skyrocketing and they decided to call an ambulance.

When paramedics arrived, Ramchand's blood oxygenation level was 70 per cent.

Little did the family know then, he would not return home for more than two-and a-half months.

At first, Ramchand was given oxygen through a nasal prong in a regular hospital ward.

By May 9, his condition had worsened.

He collapsed in his bed.

He never lost his pulse during the episode, Soma said, but moving into the ICU meant he was one step closer to intubation, something medical staff wanted to avoid.

"The nurse was telling him – 'you have stay in prone position or they're going to put a tube in you and you don't want that'," Soma said.

Soma and her mother would call and video chat with him each day.

On May 16, after a particularly hard night where Ramchand struggled to breathe, let alone sleep, Soma was speaking with him on video chat, when she noticed more commotion in his hospital room than usual.

"Is this your dad?" A man in blue scrubs asked Soma over the phone. "We're going to have to put him on a vent."

"I was numb," Soma recalled. "I didn't know how to tell my mom – it was like as if my heart stopped."

Sedated and intubated, there would be no more video calls with home.

Visits to Ontario hospitals wouldn't resume for another month.

"I was hearing all these stories," Soma recounted. "Once they go on the vent they don't come off."

Without video calls, Soma and her mother depended on phone calls with nurses for updates. His condition, measured in oxygen saturation levels and the settings of the ventilator, went up and down.

On June 29, Ramchand's condition improved to the point that he was moved out of the ICU.

But he still required a feeding tube, oxygen treatment and could only speak with his family when his trach tube was covered.

On July 2, Soma and her mother went to hospital to visit.

Soma donned a gown, gloves and mask and went into the room, where her father was covered in a blanket.

She pulled the cover down and saw her father for the first time in almost two months.

"The man I was looking at didn’t look like my father, looked like he had aged 10 years."

He was unkempt, with a bushy beard.

Soma said he looked like Tom Hanks in the movie Castaway.

He tried to speak, but Soma said all she could hear were soft puffs of air.

Through whispers and gestures, Soma said she and her father got to the basics.

Ramchand, through his sedation and lack of oxygen, had forgotten where he was.

Soma said her father made the gesture with his hands for money, as if he were worried how much his treatment had cost.

She reassured him it was all free.

On Tuesday, the whole family including the grandchildren came to Humber River Hospital to see their papa leave the hospital after 78 days.

He rolled out, in a wheelchair, with a white patch covering his trach tube.

Soma said he has a long road ahead.

He lost 25 pounds while hospitalized, he cannot walk on his own.

They're happy have him home, but say the impact the virus had on him is devastating.

"I got to watch this man who was like the pillar of our family, he was the one that kept us grounded, I got to watch him deteriorate before our eyes."

Ramchand wasn't the only one in his workplace to get infected.

By May 21, Ramchand's workplace had 21 confirmed cases of COVID-19, according to York Region Public Health.

She said that as Toronto waits to enter the third and final stage of reopening its economy, she doesn't think the public properly understands the impact COVID-19 can have.

"Until people know how dangerous this virus is, it can destroy your family, it doesn't discriminate against age or your cash, I want people to know, we were your normal everyday people."

"If this didn't happen to my dad I'd probably be one of those people. If you don't go through this nightmare – you don't know any better."