Woman dead after early-morning fire on porch of Rexdale home

A woman in her 50s is dead after a fire on the porch of a Rexdale home early Wednesday morning.

According to Toronto Fire, the woman was found suffering from severe burns on the porch of a home on Tealham Drive in the vicinity of Martin Grove and Albion roads at around 5:45 a.m. and was pronounced dead on scene.

The fire was limited to the porch and did not spread to the inside of the home.

The cause of the fire has not been determined.

“At this time it is very suspicious as to the circumstances surrounding the incident but it is very early in the investigation. We have notified homicide (detectives) and they are monitoring the situation,” Supt. Ron Taverner told CP24 at the scene.

According to Taverner, the victim lived in the home with a number of other relatives.

The Ontario Fire Marshal has been called to the scene to investigate. 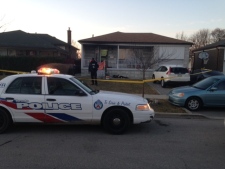 Police are shown at the scene of a fatal fire on Tealham Drive early Wednesday morning.