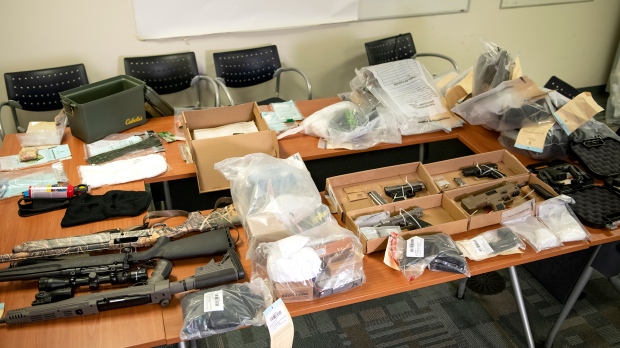 York Regional Police have charged 17 people after dismantling a gun and drug trafficking ring that was discovered following a break-in and robbery in Vaughan.

On October 17, 2019, police were called to a home on Colombo Cr. for a home invasion robbery. Police said four armed suspects forced their way into the home around 2:30 a.m. Surveillance video shows the suspects running through the home and assaulting the residents.

“All the adults in the house were tied up, zip tied, and forced down on the floor, where demands were made for money and other personal belongings,” York Regional Police Detective Ryan Boulay said.

As the investigation continued, a crowbar that was seen in the surveillance video was identified as being unique and only sold at a local store. Boulay said this development led to the name of the probe.

“An Investigation started which was dubbed Project Stanley. This was as a result of us identifying suspects who ultimately purchased a Stanley pry bar at a local Home Depot. Video surveillance was obtained through that Home Depot and we were able to identify persons associated to that purchase of the tools that were used in the home invasion.”

On April 25, police executed a search warrant at a residence which resulted in the seizure of a loaded handgun, along with a quantity of cocaine and fentanyl.

A series of search warrants were also executed across the GTA on March 24, May 13 and May 14.

In all, 15 firearms were seized as part of the investigation.

“This was a very complicated investigation,” Inspector Ryan Hogan said. “We saw officers from our Hold-Up Unit, both the Gun, Gang and Drug Enforcement Unit and the Mobile Support Unit essentially working around the clock for the last several months to bring this investigation to a successful conclusion.”

Police said the take-down was possible with the help of the Ontario Provincial Police and police services from Durham, Toronto, Peel, Sudbury, Hamilton and Halton.