Payette bids farewell to fellow astronauts and heads back to Earth

MONTREAL - Canadian Julie Payette has bid farewell to her fellow astronauts on the International Space Station and is heading back to Earth.

Payette was one of the astronauts aboard the Space Shuttle Endeavour when it undocked today from the massive orbiting laboratory.

Payette spent about two weeks on the space station with fellow Canadian Robert Thirsk and 11 other astronauts.

It was the first time two Canadians had been in space at the same time.

Payette and her six fellow crew members on Endeavour will keep busy before they are scheduled to land in Florida on Friday.

They have to inspect the shuttle to make sure its thermal shields were not broken by small meteors or space debris. 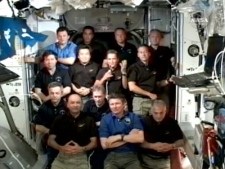 Julie Payette, centre, speaks into the microphone, as the astronauts aboard the shuttle-station complex, including Canadian Robert Thirsk, gather for a news conference on Sunday, July 26, 2009.