Politicians from all parties, backgrounds and levels of government are mourning the loss of NDP Leader Jack Layton.

Layton died Monday at the age of 61 following his second battle with cancer.

Here are some of the official statements that have been released from the likes of Prime Minister Stephen Harper and Liberal MP Bob Rae:

"I was deeply saddened to learn this morning of the death of Jack Layton. When I last spoke with Jack following his announcement in July, I wished him well and he told me he'd be seeing me in the House of Commons in the fall. This, sadly, will no longer come to pass. On behalf of all Canadians, I salute Jack's contribution to public life, a contribution that will be sorely missed. I know one thing: Jack gave his fight against cancer everything he had. Indeed, Jack never backed down from any fight. To his wife Olivia, his family, and to his colleagues and friends, Laureen and I offer our heartfelt condolences. Our thoughts and prayers are with you during this most difficult time."

"Like all Canadians, Arlene and I are deeply saddened by the death of Jack Layton. He was a friend of ours for many years, and despite our political differences his decency, good humour and extraordinary resilience earned our deep admiration. We remained friends throughout our political lives. On behalf of the Liberal Party of Canada and our Parliamentary Caucus, I express our deep condolences to Olivia and Jack's family, as well as to his colleagues and friends in the New Democratic Party. He leaves a powerful legacy of a commitment to social justice in his work in Toronto as a city councillor and as a national leader. Peace and comfort to all. When David Lewis passed away Stanley Knowles ended his eulogy with the words "shalom chaver, shalom." Peace, brother, peace."

New Democrats today are mourning the loss of a great Canadian. Jack was a courageous man. It was his leadership that inspired me, and so many others, to run for office. We – Members of Parliament, New Democrats and Canadians – need to pull together now and carry on his fight to make this country a better place. On behalf of New Democrats from coast to coast to coast, our thoughts and prayers are with our colleague Olivia Chow, Jack's children Sarah and Mike and the rest of Jack's family. And we remember the Tommy Douglas quote Jack included in every email he sent: "Courage my friends, ‘tis never too late to build a better world."

"I am deeply saddened by the untimely death of Jack Layton. Collectively, Canadian hearts are breaking. Jack will always be remembered for his unfailing love of Canada and his dedication to this country and its citizens."

"Jack Layton's contribution to Canada was cut short most unfairly. His dedication to our country, to public life and to his party was vividly apparent in everything he did and all that he achieved. We first met when he was a City Councilor (sic) and we were working together in support of a national cities agenda. It was there that I recognized his passion for the causes in which he believed and that later made him a great parliamentarian. Sheila and I wish to express our profound condolences to his wife Olivia and his family."

"I was saddened today to hear of the passing of Jack Layton. Canada has lost a great Canadian. Throughout his life and career, Jack was a determined servant of the people. He always worked hard to represent his constituents, their interests and their needs. He was always a tireless champion for people and our communities. Ontarians and indeed, all Canadians, will miss his passion, hard work and fighting spirit. Our thoughts and prayers are with Olivia and all of Jack's family and friends."

"Today New Democrats lost a leader, a mentor and a friend. Jack Layton taught Canadians a new kind of politics. He inspired a generation of voters with his principles of compassion, fairness and equality. He set an example. He brought us together. He spoke to all Canadians, in the cities, in the north, in the country and on the coasts. My heart goes out to Olivia, Mike, Sarah and all of Jack's family and friends. We'll miss you Jack."

"On the Council floor Jack Layton was a skilled debater who was well known for responding to the needs of all residents of Toronto. Jack was a fighter and he will be missed in Canadian politics. On behalf of the Members of Toronto City Council, I extend our deepest condolences to Jack's wife, Olivia, to son Mike Layton who serves on Toronto City Council, to daughter Sarah Layton, and all of his family."

"I was deeply saddened this morning to learn about the passing of Jack Layton. I had the opportunity to serve with Jack for over two decades on the Toronto City Council and several other governing bodies where I saw firsthand his deep commitment to helping improve the lives of so many people especially those who were struggling and living on the street. Jack brought a sincere and very compassionate human touch to the issue and was a strong advocate for those that needed help. He was also a very active environmentalist who supported a long-term city vision approach. As NDP leader, he took the party to unbelievable historic heights. He also strongly believed in the things that he said and did unlike many other elected officials. Jack debated the most important issues with passion, understanding and belief, and for that you had to respect him. I offer my sincere condolences to his wife Olivia, his children and the Layton family. I liked Jack!" 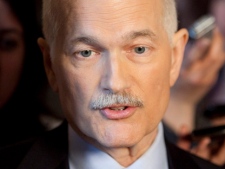 NDP leader Jack Layton speaks with the media in the foyer of the House of Commons following the federal budget on Parliament Hill in Ottawa on Tuesday March 22, 2011. (THE CANADIAN PRESS/Fred Chartrand)