No mayor? No problem.

With an estimated crowd of more than one million people, Toronto's annual Pride Week parade went off with its usual exhibition of colour, heart-pounding music and skin Sunday as people celebrated 31 years of Pride, despite Mayor Rob Ford's controversial absence.

For organizers and many participants, the record-breaking event was more than a massive celebration that takes over several city streets.

The parade was a chance to remind Toronto and the rest of the world there is still plenty of work to do to achieve equal rights for LGBT (lesbian, gay, bisexual and transgender) communities worldwide.

"Our parade is a little bit of a celebration but it's a remembrance that we still have some fighting to do," Glen Brown, Pride Toronto's interim executive director, told CP24.com. "It's partly to celebrate the success that we've had fighting for equality and to celebrate our diversity, but we have to remind ourselves that we're not done fighting."

He said the 6,000 people who marched through the sweltering heat to a theme of "dream big" likely set a new record.

"It's probably the highest we've ever had," Brown said.

(Click here for a photo gallery from Sunday's parade.)

The three-hour parade, the largest of its kind in Canada, capped a 10-day Pride Week that generates about $100 million for Toronto's economy and draws thousands of visitors.

Participants marched west on Bloor Street from Church Street, south on Yonge Street to Gerrard, and east on Gerrard to Church, where the parade ended but the party continued.

Everyone had various reasons for being there, but they all spoke of the same purpose: achieving equal rights and acceptance.

Rob and Sue Metcalf arrived early to snag a front-row seat. They wanted to show their support and celebrate because their church is planning to become an affirming church.

"An affirming church welcomes gays, lesbians, bisexuals and transgender people, and it includes them in their work," Rob Metcalf said. "It makes us feel good that our church (is becoming one)."

For a handful of participants, clothing was optional.

Jim, who declined to give his last name, let it all hang out as he wore his birthday suit to the parade.

"I get a lot of smiles and some pointing and giggling," Jim said after posing for a photo with a tourist on the steps of a church. "It's a great ice-breaker, for sure. For me, it means being comfortable with who you are, being proud of who you are and accepting yourself."

This year's parade didn't go off without controversy, largely due to Ford's absence.

Ford skipped the parade to continue a family tradition of spending Canada Day in cottage country. He also missed Pride events held earlier in the week, including a rainbow flag raising at city hall.

Ford faced plenty of criticism and he was forced to deflect accusations of homophobia.

Many at the parade told CP24.com that they saw his absence as a slight.

Some waved signs denouncing the mayor, while others poked fun at him by covering their faces or genitals with cardboard cut-outs of Ford's face.

It was the first time since 1994 that Toronto's sitting mayor didn't march in the parade. Former mayors Barbara Hall and David Miller were spotted on the parade route.

'Toronto at its best'

Miller told CP24.com that he attended Sunday's Pride parade to continue his own long-standing tradition.

"I believe this event shows Toronto at its best," said Miller, who was Toronto's mayor until Ford took over last fall. "In our city, everybody's welcome."

As Miller shook hands and greeted spectators, one young man shouted "Our old mayor is better than our new one," drawing a chorus of cheers.

Brown was disappointed the mayor didn't attend, but said the invite still stands for next year's Pride Week.

"He missed an opportunity to make connections," Brown said. "There will be more opportunities for him to attend in the future."

The event was well attended by politicians from all levels of government and all party lines, although the Liberals, NDP and Green party appeared to have the most participants. There were few hints of Tory blue.

Liberal MPP Glen Murray, who became North America's first openly gay mayor when he was elected in Winnipeg years ago, took a subtle dig at Ford.

"There are more people out here today than those who voted in the mayoral election, just saying," Murray told CP24.com as he marched alongside Liberal MP Bob Rae.

Pressed to explain the comment, Murray said: "I'll just leave it at that."

As with every year, individuals or groups used the parade as a stage to push an agenda or to make a point.

Haley Gotfrid, a member of Kulanu Toronto, a Jewish LGBTQ social, education and cultural group, marched with a sign reading "Jews and Arabs party in the same bars in Israel. Isn't that queer?"

Gotfrid said the purpose of the sign was to send a clear message that Israel is an open, diverse country.

"I really feel the need to clarify a misconception," Gotfrid said. "Israel is one of the world leaders in gay rights."

The message was a direct response to the ongoing controversy stirred by Queers Against Israeli Apartheid (QuAIA), an activist group that has been accused of being anti-Semitic.

QuAIA voluntarily withdrew from the parade earlier this year after city councillors threatened to nix Pride Toronto's funding if the group marched in the parade.

Still, QuAIA made its presence known on the parade sidelines by hanging a large banner over the side of Wellesley Station.

In a news release, QuAIA spokesman Tim McCaskell explained the reason for the banner.

"We're drawing attention to Israel's use of LGBT rights as a propaganda tool to justify apartheid policies and the occupation of Palestinian territories," McCaskell said. 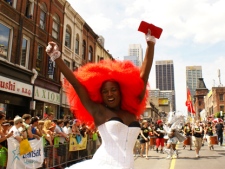 A participant in Toronto's annual Pride parade celebrates as the parade makes its way south on Yonge Street. Some estimates pegged the crowd at one million. More than 6,000 people marched or rode on floats. (CP24/Chris Kitching)