TORONTO - A full-scale public inquiry is needed in light of the widespread and violent trampling of civil rights by police at last summer's $1-billion G20 summit in Toronto, a new report concludes.

The call for an inquiry is among recommendations in the report -- by the Canadian Civil Liberties Association and National Union of Public and General Employees -- which is aimed at holding governments accountable and avoiding a recurrence.

"The many violations of civil liberties that occurred during the summit, such as illegal detentions and searches and excessive uses of force, cannot have simply been the actions of a few bad apples," the report states.

"Rather, given the scope and severity of the violations of rights that occurred during the G20, it is difficult to view this situation as anything other than a failure of policy and training."

The 59-page report -- slated for release Monday -- is the result of three days of public hearings in Toronto and Montreal in November.

Dozens of people caught up in the weekend mayhem last June -- 1,105 people were arrested -- spoke up, as did lawyers and academics. Police refused to take part.

"Much of the testimony we heard was shocking and appalling," said union president James Clancy.

"Over and over again, witnesses recounted their experiences involving the excessive violent dispersal of peaceful demonstrators by police and the dehumanizing treatment of many of those who were detained."

Speakers included Natalie Gray, 20, who alleges she was hit by police-fired rubber bullets while she and 150 others protested peacefully.

Among the photographs in the report is one of Revenue Canada worker, John Pruyn, 58, who had his artificial leg yanked off by police who arrested him as he sat on the grass at the legislature.

The crackdown, which has spawned several lawsuits, intensified after a small group of vandals smashed windows and set alight police cruisers as officers failed to intervene.

"In an effort to locate and frustrate a small cohort of vandals, police disregarded the constitutional rights of thousands," the report states.

The report, "Breach of the Peace," notes concerns that police informants may have supported the vandalism.

The vast majority of those detained or charged have been released, although a handful of cases are still before the courts.

One officer faces criminal charges related to his summit actions.

The Toronto Police Services Board, Ontario's Office of the Independent Police Review Director and Ontario's ombudsman have all delved into the events.

In December, Ombudsman Andre Marin said "the most massive compromise of civil liberties in Canadian history" had occurred during the G20 weekend.

"The rights violations raise serious systemic questions about policing policy and training that can only be resolved through a comprehensive federal-provincial public inquiry," she said.

The inquiry recommendation also contains a proposed terms of reference.

Among its seven other recommendations, the report calls for changes in police policy and training, a review of undercover police informants, and a legislative framework with better civilian oversight to govern security operations. 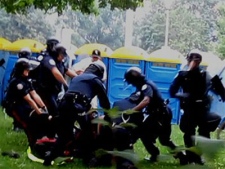