76ers' Howard suspended one game for too many technicals 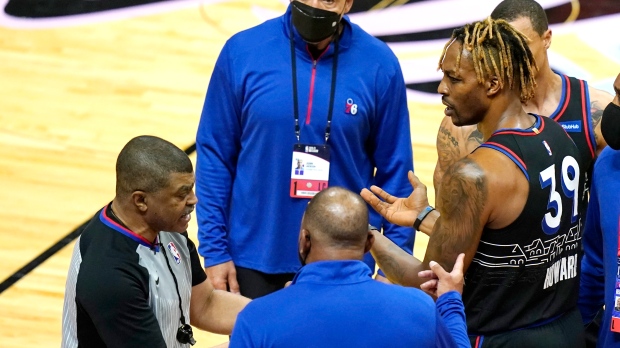 Philadelphia 76ers center Dwight Howard (39) talks with official Tony Brothers, left, after an altercation with Miami Heat forward Udonis Haslem during the first half of an NBA basketball game Thursday, May 13, 2021, in Miami. (AP Photo/Lynne Sladky)

NEW YORK (AP) -- Philadelphia 76ers center Dwight Howard was suspended one game without pay by the NBA on Friday for picking up his 16th technical foul of the season.

The league said he will serve the suspension Friday night when the 76ers play the first of two homes against the Orlando Magic to close the regular season. If Philadelphia wins one of those games, it will be the No. 1 seed in the Eastern Conference for the first time since 2001.

Howard's technical came with 10:19 left in the second quarter of a 106-94 loss to the Heat in Miami on Thursday night. Howard knocked forward Udonis Haslem to the floor while the two were going for a rebound. Haslem got up and followed Howard down the court and confronted him.