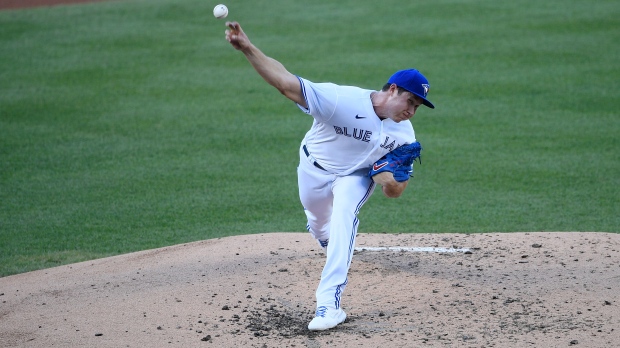 WASHINGTON - Highly-touted pitching prospect Nate Pearson was as advertised in his big-league debut for the Blue Jays on Wednesday night, but the Washington Nationals spoiled Toronto's home opener by scoring four times in the 10th inning for a 4-0 victory.

The Nationals (2-4) scratched out a run against reliever Shun Yamaguchi (0-2) before Asdrubal Cabrera broke the game open with a three-run triple.

Yamaguchi nearly got out of the inning unscathed after walking Carter Kieboom and Andrew Stevenson to load the bases. Pinch-runner Emilio Bonifacio started the frame on second base.

After back-to-back strikeouts, Adam Eaton hit a hard comebacker that Cavan Biggio scooped up before diving to second base to try to beat Stevenson for the force. Toronto challenged the safe call but the decision was upheld with Bonifacio scoring the game's first run.

Tanner Rainey worked the 10th to preserve the shutout for the Nationals, who will go for a split of the four-game series on Thursday afternoon.

Washington starter Max Scherzer was just as strong on a hot summer evening in the U.S. capital. The three-time Cy Young Award winner struck out 10 and allowed three hits over 7 1/3 scoreless innings.

The Blue Jays (3-3) will play so-called home games in road parks until the team's 2020 home at Buffalo's Sahlen Field is ready on Aug. 11. A team proposal to play home games at Toronto's Rogers Centre was kiboshed by the government before the season due to concerns about COVID-19.

A towering presence on the mound, Pearson showed no sign of jitters against the reigning World Series champions.

He started with a bang, opening with a 95-m.p.h. fastball on the inside corner before getting Trea Turner to wave at two breaking balls for the strikeout.

Relying primarily on his heater and slider, Pearson mixed in the occasional curveball and change-up over his appearance. He reached 99 m.p.h. in the second inning and retired the side in order.

Pearson allowed an infield single to Turner in the third and a leadoff double to Eric Thames in the fourth. Thames advanced to third but Pearson struck out Kieboom on three pitches to end the threat, capping the at-bat with a 99-m.p.h. fastball at the knees.

Pearson fanned two more batters in the fifth and Turner flew out to end the inning. The first-round draft pick was all smiles in the dugout afterward as teammates, manager Charlie Montoyo and pitching coach Pete Walker congratulated him on the effort.

The Nationals threatened in the seventh inning as reliever Sam Gaviglio issued a one-out walk to Starlin Castro and a single to Kieboom. Lourdes Gurriel Jr., saved at least a run with a nice catch in deep left field and Jordan Romano, a native of Markham, Ont., came on to strike out Victor Robles.

The veteran Scherzer retired 13 in a row before giving up a leadoff single to Joe Panik in the eighth inning.

Anthony Alford came on as a pinch-runner, stole second and moved to third on a wide pickoff attempt. With his pitch count at 112, Scherzer was pulled after walking Derek Fisher.

Former Blue Jay Daniel Hudson (1-0) got Teoscar Hernandez to ground into a double play. Hudson struck out the side in the ninth.

By not selecting Pearson's contract until Wednesday, he will not get a full year of service time in 2020 and his free-agent eligibility won't begin until after the 2026 campaign. Pearson, the 28th overall pick in the 2017 draft, opened the season on the three-man taxi squad.

He split last year between class-A Dunedin, double-A New Hampshire and triple-A Buffalo. His longest run was at New Hampshire, where he was 1-4 with a 2.59 earned-run average in 16 starts, striking out 69 and walking 21.

It's possible that Pearson could make 10-12 starts over the course of the regular season, which has been shortened to 60 games due to the pandemic.

Notes: Before the game, the Blue Jays optioned left-hander Brian Moran to the team's taxi squad to make room for Pearson. ... Toronto shortstop Bo Bichette (hamstring) and outfielder Randal Grichuk (back) remain day to day with injuries. ... Rowdy Tellez was ejected in the 10th inning for arguing after a strikeout. Blue Jays coach Dante Bichette was also kicked out. ... The Blue Jays will get an off-day Friday before a Saturday doubleheader in Philadelphia. Toronto will again serve as the home team for the three-game series.

This report by The Canadian Press was first published July 29, 2020.