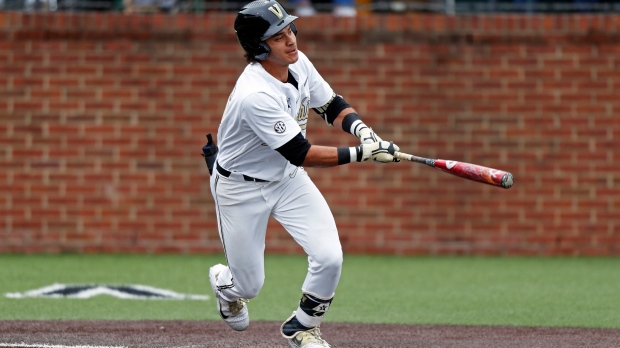 FILE - In this May 11, 2019, file photo, Vanderbilt's Austin Martin connects for a hit during an NCAA college baseball game against Missouri in Nashville, Tenn. (AP Photo/Wade Payne, FIle)

The Blue Jays used their top pick to select the Vanderbilt University product at the Major League Baseball amateur draft on Wednesday after the 21-year-old fell to them at the No. 5 spot.

Martin, a 2019 College World Series champion with the Commodores, was No. 2 on Baseball America's Prospect Rankings list, with some scouts calling him the best pure hitter in the draft.

“We were a little surprised but we were certainly prepared to make that selection,” said Jays amateur scouting director Shane Farrell.

“We identified Austin as high-end talent. We were fortunate enough to be in a position he was still available ... He was the best player (still) on the board.”

The versatile Martin, who heard his name called while sitting on a couch at home with family surrounding him, was announced as a shortstop. He has spent time at various positions at Vanderbilt, though, including six alone in his freshman season.

Martin began his shortened-2020 season at third base and finished in centre field. Farrell says the Jays won't decide just yet where they want him to play.

“He's shown he can play multiple spots up the middle, it's exciting and valuable to the organization,” said Farrell.

Martin was originally taken by the Cleveland Indians as a 37th-round pick in the 2017 MLB Draft. But, instead of joining the Indians out of Trinity Christian Academy in his hometown of Jacksonville, Fla., he chose to attend Vanderbilt.

The six-foot, 185-pound Martin bats and throws right, and was called a “baseball rat” by his college coaches.

“This is a guy who manages the strike zone really well, extremely high contact rates, someone we think who can grow into more power down the road,” said Farrell.

The Blue Jays selected fifth overall for the first time since taking Vernon Wells at No. 5 in 1997.

This year's draft has been cut down to just five rounds from the usual 40 in a cost-cutting move due to the pandemic.

The draft was originally scheduled to be held this week in Omaha, Neb., ahead of the now-cancelled College World Series. Instead, the league is going with a two-day virtual draft at the MLB Network studios in Secaucus, N.J., with the first 37 picks being called Wednesday. A total of 160 picks will be made.

Farrell says the pandemic didn't alter Toronto's scouting reports on Martin, with the organization keeping an eye on him since high school.

“He was a good player in his high school days, there's been history built with this player over a number of years which has made this more comforting even in a shorter scouting season,” said Farrell.

With the sport on hiatus, the draft is providing baseball-starved fans at least some measure of satisfaction. MLB and the players' association have been exchanging proposals regarding a potential return but nothing has been finalized.

This report by The Canadian Press was first published June 10, 2020.