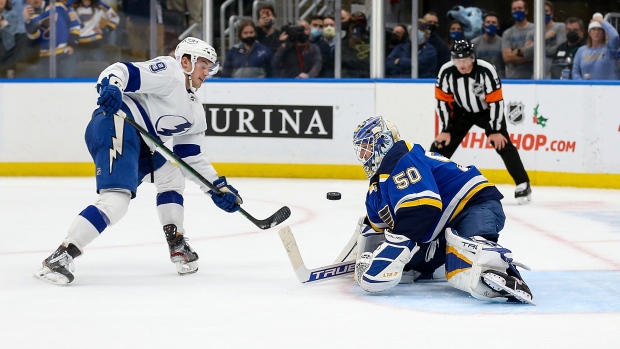 St. Louis Blues goaltender Jordan Binnington entered the NHL's COVID-19 protocol Thursday, putting the team in a difficult situation because of salary-cap constraints.
General manager Doug Armstrong said Binnington tested positive for the coronavirus. It was not clear if Binnington had any symptoms.
"You don't like to hear that news," coach Craig Berube said on a video call. "We just move on, boys. That's all we can do. ... It's just another road block, we just got to get through it."
Binnington joins forward Tyler Bozak as Blues players in league virus protocol. They are also without injured forwards David Perron, James Neal and Klim Kostin.
St. Louis plans to recall goalie Charlie Lindgren on Friday, but could not do so in time for its game Thursday night at the Tampa Bay Lightning.
League rules stipulate that because the Blues don't have the cap room to add another player to the roster, they have to get through one game with an emergency backup.
Ville Husso was set to start at the Lightning, with 23-year-old mask painter Kyle Konin backing up. Konin most recently played club hockey at Grand Valley State University.
"He had a morning skate today with his beer league guys and he said he was on fire and ready to go, so we're excited to have him in here," Armstrong said. "Knock on wood that he'll remain a 60-minute cheerleader."
Binnington, who backstopped the Blues to their first Stanley Cup title in 2019, is 8-5-3 with a 2.80 goals-against average and .912 save percentage in 16 starts this season. The 28-year-old is also a leading candidate to be one of Canada's goalies at the upcoming Olympics in Beijing, assuming the NHL does not withdraw.
Husso is expected to get the lion's share of duties in net while Binnington is out. The 26-year-old Finn is 3-1-0 with a 1.76 GAA and .936 save percentage in limited action this season.
Berube saw a change in Husso's approach last season and thinks he's ready for the opportunity.
"I believe he's in a better place," Berube said. "It's obviously new for him to handle the load. But I'm going off his play this year so far and he's played extremely well."