Boucher diagnosed with sprained MCL, will miss next three games at least 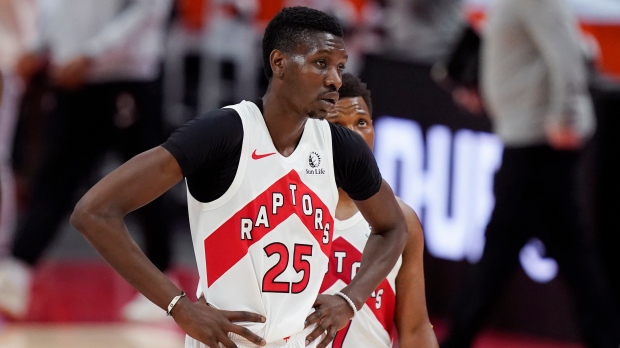 Toronto Raptors forward Chris Boucher walks off the court during the second half of an NBA basketball game against the Detroit Pistons, Wednesday, March 17, 2021, in Detroit. (AP Photo/Carlos Osorio)

MIAMI - Toronto Raptors forward Chris Boucher will miss at least the next three games with a sprained MCL in his left knee.

Boucher suffered the injury when he landed awkwardly in Wednesday's victory over Brooklyn.

The team said he'll sit out until the Raptors depart for their upcoming west coast road trip, April 29 to May 4, and his condition will be updated as appropriate.

The Raptors are (25-34) are 12th in a tight Eastern Conference, just half a game back of Washington for 10th place and a spot in the play-in tournament.

The Raptors visit New York on Saturday to face the Knicks. They host Cleveland and Brooklyn before heading west.

This report by The Canadian Press was first published April 23, 2021.