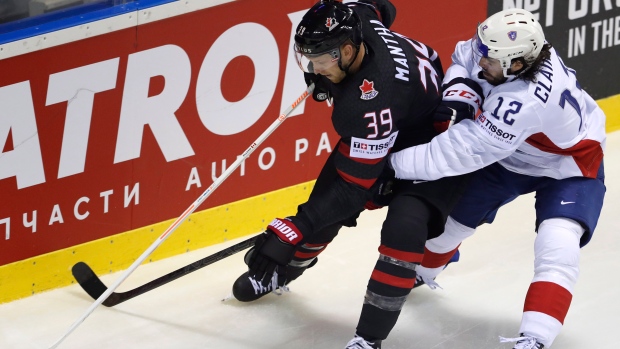 KOSICE, Slovakia -- Canada extended its win streak to three games with a 5-2 win over France on Thursday at the world hockey championship.

Canada's win over France was the latest against a country not regarded as an international power in the sport. Canada (3-1) also beat Great Britain and Slovakia after falling against Finland on the opening day of the tournament.

France (0-3-1) did give Canada a bit of a scare, narrowing the deficit to 3-2 in the third period after falling behind 3-0 in the first. But goals by Anthony Mantha and Mark Stone restored Canada's three-goal lead.

Mantha opened the scoring for Canada on the power play. Darnell Nurse and Anthony Cirelli also scored first-period goals for Canada, which outshot France 16-2 in the opening 20 minutes and 46-23 overall.

Mantha, a Detroit Red Wings forward from Longueuil, Que., leads Canada with five goals and nine points at the tournament.

Goaltender Carter Hart recorded the win in net for Canada.

France goalie Henri Corentin Buysse was named the player of the game for his team. Forward Sean Couturier, who had one assist, was chosen as Canada's top player.

The Canadians have three games left in the preliminary round, starting with a contest against unbeaten Germany (4-0) on Saturday.