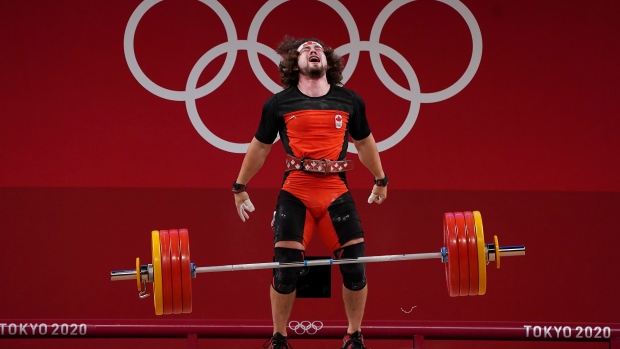 Boady Santavy of Canada reacts after lifting 208kg as he competes in the Menâ€™s 96kg Weightlifting finals during the Tokyo Summer Olympic Games, in Tokyo on Saturday, July 31, 2021. THE CANADIAN PRESS/Nathan Denette

TOKYO -- Canada's Boady Santavy lifted a combined 386 kilograms to take fourth on Saturday in the 96-kilogram weight class at the Tokyo Olympics.

Qatar's Fares El-Bakh set an Olympic record with a clean and jerk of 225 kilograms on his second attempt to clinch gold with a total of 402.

He then attempted a world record of 232 kilograms with his third clean and jerk try, but dropped the bar.

Venezuela's Keydomar Vallenilla Sanchez and Georgia's Anton Pliesnoi took silver and bronze as both lifted a total of 387 kilograms.

Santavy, from Sarnia, Ont., lifted a finals-best 178 kilos in the snatch before making a 208-kilo lift in the clean and jerk.

Although no spectators are allowed at Olympic venues in Tokyo, members of national teams of the 10 competitors were in the seats.

The theme from the Kaiju movie "Pacific Rim" thumped over the loudspeakers at the Tokyo International Forum as competitors and officials were introduced.

Santavy's opening weight in the snatch was 173 kilograms, the highest first attempt along with El-Bakh. The lowest weight attempted was 160.

After making his first snatch attempt, Santavy gave a curt nod to the bar before calmly walking off the platform.

Santavy dropped his second attempt of 177 kilograms, shaking his long curly brown hair -- kept out of his eyes with a Maple Leaf bandana -- in frustration.

El-Bakh, Venezuela's Keydomar Vallenilla Sanchez, and Georgia's Anton Pliesnoi all made the 177 mark, so Santavy upped the weight on his third snatch attempt by a kilogram.

The Canadian flexed, shouted, and pounded on his chest after completing the 178-kilogram snatch, guaranteeing at least second in the event heading to the clean and jerk.

Taiwan's Po-Jen Chen then tried 180-kilograms for his final snatch, but came up short putting Santavy into first overall.

Before the clean and jerk began Santavy selected 200 kilograms for his opening attempt, one of the lower bids in the group of 10 with 195 as the lowest.

Santavy made his first clean and jerk attempt without incident, with his coach and father Dalas Santavy egging him on to complete the motion and get the bar above his head. That gave him a total of 378 kilos.

Chen put pressure on Santavy, completing a clean and jerk of 205 kilos on his second attempt to move to the top of the leaderboard, three kilos ahead of the Canadian.

Santavy then stepped on to the platform, biting his lower lip as he brought the 205-kilogram bar to his shoulders, but dropped it before he could clear it over his head.

Pliesnoi made a 206-kilo lift to overtake Chen at the top of the standings with a total of 383, sliding Santavy down to third five kilos back.

His dad shouted "pull it hard" as Santavy put his hands on the bar for a 208-kilo lift, his third and final attempt in the clean and jerk. He made the lift cleanly and then slapped the platform and kissed it before striding over to his father for a hug.

That lift put Santavy in first again, but meant he had to sit and watch the rest of the field complete their attempts with five other athletes still in the running.

Vallenilla Sanchez topped Santavy with a 210 kilo lift in the very next attempt to take over the top spot, a total of 387 kilograms to the Canadian's 386.

Pliesnoi's third attempt of 210 kilograms -- a total of 387 -- put the Georgian into a tie for first with Vallenilla Sanchez and slid Santavy into the bronze position.

Vallenilla Sanchez's miss on his third attempt of 216 kilograms, confirmed by a jury review, kept the top three intact.

That brought El-Bakh to the platform for his first clean and jerk attempt of 217 kilos, which clinched gold.